When it's adopted May 1, the county's real estate tax rate will rise and the average homeowner can plan on paying hundreds of dollars more.
Listen now to WTOP News WTOP.com | Alexa | Google Home | WTOP App | 103.5 FM

WASHINGTON — Fairfax County supervisors have sent a budget forward that could hit homeowners hard. When it’s adopted May 1, the Virginia county’s real estate tax rate will rise and the average homeowner can plan on paying hundreds of dollars more.

“The the budget mood this year was harmonic — thanks to an advertised budget that I believe hits the right notes,” said Sharon Bulova as she opened her statements about the fiscal 2019 budget.

Bulova, the chair of the Fairfax County Board of Supervisors, announced a 2-cent increase in the real estate tax rate, which will mean an additional $241 on the average annual tax bill.

“I believe the additional revenue is an important investment needed to shore up the foundation on which our quality of life in Fairfax County rests,” Bulova said.

“It is clear taxpayers were an afterthought and not the priority in this budget,” Herrity said in a statement.

The amended budget, which passed the board on an 8-to-2 vote, also allocates money for gang prevention, fully funds compensation for county employees and raises teacher salaries to competitive levels with neighboring jurisdictions.

“Overall support for our school system is increased by $91.49 million, or 4.22 percent over fiscal year 2018. With 52.8 percent of our overall budget going to the schools,” Bulova said. 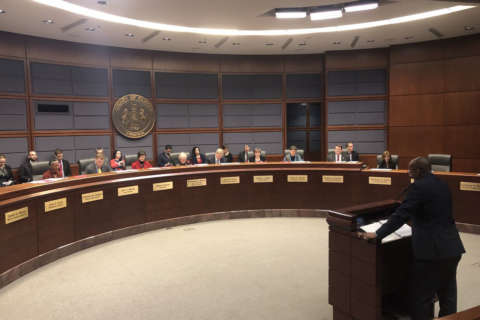