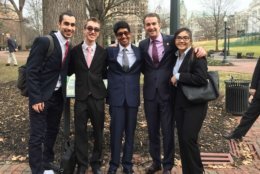 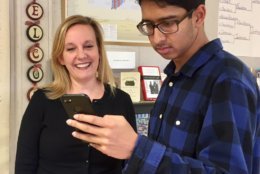 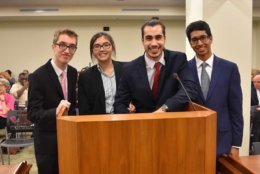 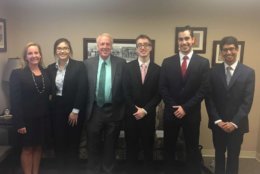 WASHINGTON — A new bill signed by Virginia Gov. Ralph Northam will make it mandatory for Virginia 911 call centers to accept text messages — and it was proposed by a team of four Fairfax County high schoolers.

“Every student writes a proposal for a bill idea that will improve the lives of Virginians,” Ruffing told WTOP.

She said her class has been writing bills for 11 years. Two of the proposed bills became laws the year they were proposed.

One that passed about two years ago blocked universities from forcing students to turn over user names and passwords to their private social media accounts.

“Our most important job is to prepare citizens — that’s what social studies and civic education is all about. To look around, identify a problem, and propose a solution, and make it happen,” Ruffing said.

The Virginia Tech shooting in 2007 helped spark the idea for the current bill, according to Ruffing. Montgomery County, Virginia, where the shooting took place, did not have text-to-911.

“Those students were obviously not wanting to voice their calls because they were hiding from an active shooter,” Ruffing said.

“They were texting friends and family in Northern Virginia. Those people would call 911, but would get the Fairfax County 911, who had to transfer the call back to Montgomery. You can think of the precious moments that were lost in the ping-ponging around instead of being able to do it directly.”

She estimates 30 percent of Virginia counties have text-to-911.

While most of Northern Virginia’s larger counties, including Arlington, Fairfax, Loudoun, and Prince William counties, and the city of Alexandria have the system, many smaller jurisdictions throughout the commonwealth do not.

Arko Mazumder, 17, one of the students who proposed the bill, said two other students had seen the idea on Facebook, and initially suggested it, but he and his partner researched previously failed bills in the Virginia Senate and decided to reintroduce it.

“I think I can speak for any modern teenager when I say phones are pretty much the center of our daily activities,” Mazumder told WTOP.

He said it makes sense that young, phone-savvy students came up with the idea.

“Of course, because we recognize these times are changing. More students, and especially Americans, are more inclined to text than call because of its numerous advantages,” Mazumder said. “I was pretty excited when we first introduced the bill.”

Ruffing pointed out that there is a touch of irony to the situation when it comes to her team of students and their bill.

“None of them is eligible to vote right now, but they were able to make a difference in government, even before being able to vote,” she said.

Gov. Northam signed it in March.