FALLS CHURCH, Va. — When you’re a “Star Wars” bad guy, you have a reputation to uphold.

But earlier this month, Darth Vader, Kylo Ren, a gaggle of Stormtroopers and other famous practitioners of the dark side of the Force were found making children smile at Inova Fairfax Hospital in Falls Church.

It was the annual holiday party sponsored by the nonprofit groups DC Candlelighters and Growing Hope, for kids who are fighting cancer or have finished treatment in the last year.

Luke, who is 4 years old, said he’s a fan of Darth Vader and Luke Skywalker.  Why?  “Because I’m Luke, and Darth Vader’s Luke’s father,” he answered.

The men and women portraying the characters belong to the costuming group Garrison Tyranus, which is the Virginia chapter of the 501st Legion.

The all-volunteer group takes part in numerous charity and community events, and members come to Inova Fairfax Hospital about once a month to get some giggles out of little ones in hospital beds who desperately need a distraction.

At the party, Matt Leech was decked out as a “festive” Stormtrooper with a red undersuit under his white armor instead of the usual black, and a Santa hat made to fit on top of his helmet.  Normally, he would be armed, but not this day.

“Instead of a blaster, since we are in a family environment, I decided to just bring a candy cane that just basically looks like a blaster.” Leech said seeing the kids light up makes him choke up.  “I’m very glad I’m wearing a helmet, because you shouldn’t really see a Stormtrooper cry.”

Lance Antill wore an Imperial TIE fighter pilot costume. “I do it because of the smiles. That’s how I get paid,” he said. Why does he dress as a villain, instead of one of the good guys from the Rebel Alliance?  “The Dark Side draws you in, and plus we have cookies,” Antill said, explaining that cookies are indeed served at many Garrison Tyranus events.

Portraying Darth Vader from “Empire Strikes Back” at the party was James Wuest.  He’s 6-foot-2, but wears boots with heels inside that bring him up to an imposing 6-foot-8. It took Wuest two years to build his costume, which includes sound effects replicating Vader’s famous heavy breathing, and he continues to make small upgrades. 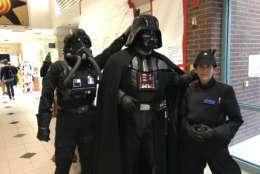 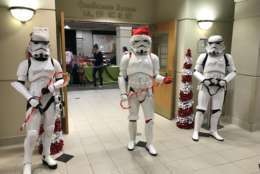 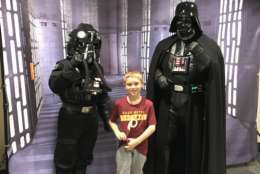 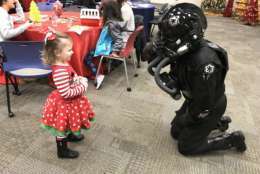 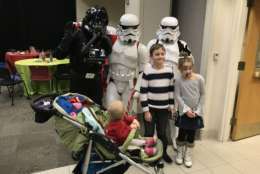 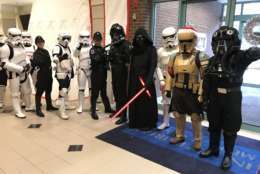 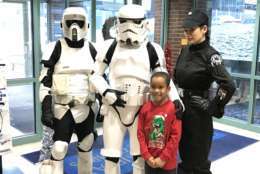 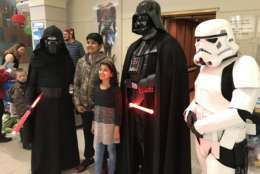 He said interacting with kids is a lot of fun: “Most of the time they’re just in awe, and they just want to touch the buttons; they want to see all the lights; they want to play with the lightsaber.”

DC Candlelighters was founded by seven mothers of children who had finished cancer treatment, and who wanted to give back to other families going through the same thing.

“We’re holding candles for them so that they can know they’re not alone in this,” said the group’s president, Meg Crosset.

The holiday party is one of several that the group hosts at the hospital throughout the year.

Growing Hope also provides nonmedical support to children getting treatment for cancer and their families.

Also contributing to the party were Team Mathias, which helps newly diagnosed child cancer patients, and Ellie’s Hats, which donates hats and other treats to kids with cancer and their siblings.