The crime of teen sex trafficking is not going away. In fact, it's only getting worse, experts say. One part of the solution is education.
Listen now to WTOP News WTOP.com | Alexa | Google Home | WTOP App | 103.5 FM
(1/7) 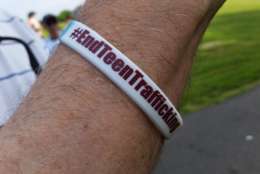 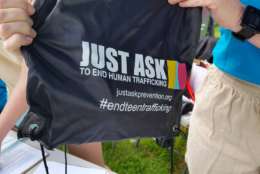 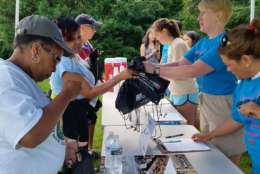 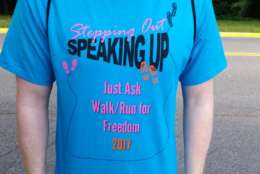 WASHINGTON — The crime of teen sex trafficking is not going away. In fact, it’s only getting worse, according to Deepa Patel, a licensed clinician and executive director of Trauma and Hope in Springfield, Virginia, who works with trafficking victims.

But one way to battle the issue is to raise awareness.

That’s exactly what community leaders, law enforcement, students, parents and concerned residents did on Saturday morning as they kicked off the county’s inaugural teen sex trafficking awareness walk/run on the grounds of the county government center.

They came together to shine a light on a problem people either don’t know about or don’t want to talk about.

Jodi O’Hern with Just Ask Prevention Project to end teen sex trafficking spoke to the crowd before the event got underway Saturday morning.

“Many of you don’t know that we have had trafficking victims from every single high school in this county, many victims from many middle schools and some elementary schools, some children as young as 9-years old,” she said. “It’s tragic isn’t it?”

She said the only way to eradicate the problem in Fairfax County and in the U.S. is to talk about it.

The Just Ask nonprofit was created by detectives from the Fairfax County Police Department and brings together county agencies, schools, and community leaders to educate and raise awareness about human trafficking in Northern Virginia.

The walk/run was organized by Just Ask.

According to the Just Ask website, the FBI lists teen sex trafficking as the second-fastest growing crime in the country and Northern Virginia is one of the top hot spots for teen trafficking.

Liz Payne is a volunteer with Just Ask Prevention and also works with Fairfax County Public Schools as the curriculum coordinate for health education. She said Just Ask works with the schools and does a lot of community outreach about teen sex trafficking.

The walk grew out of those community outreach efforts, according to Payne.

“It’s really profitable for them,” Payne said. “You know when you sell a drug that it’s done. When they sell children, they sell individuals in prostitution, it’s an ongoing product they can use again and again and again.”

Fairfax County police Detective Bill Woolf agreed that the gangs are cashing in on this dark crime, which targets mainly girls.

“The gangs in general are shifting to human trafficking as a source of revenue. It’s a higher yield and less risk,” he said.

In 2009, while working as a detective dealing with gangs in Northern Virginia, he learned about the problem of teen sex trafficking and how pervasive it was in Fairfax County. Since then, he’s been a force fighting to eradicate it.

He said it’s his goal.

Several years ago, they recovered a 17-year-old girl from a Fairfax County hotel who had been trafficked for three years in Northern Virginia, Woolf said.

The teen told them she had both parents at home and she’d been living at home during the trafficking.

They asked her how it was possible for her to be trafficked for three years.

She told Woolf that, during that time, she had a counselor and she was going to school and talking to her teachers.

During the three years that she was being exploited in Northern Virginia, there were people who were engaged in her life.

Woolf asked her how was it possible that this happened to her.

“Nobody asked, nobody asked me what was going on,” she said. “If somebody would have just asked I wouldn’t have been a victim.”

That’s how the non-profit got its name: Just Ask.

Woolf said prevention starts with education. He also said at least more than one victim who talked to him said they might not have been a victim if they simply knew about trafficking.

“If someone talked to [them] and educated [them] about the issue,” Woolf said.

He said the goal is to educate everybody about the realities of trafficking. That it’s real and it’s happening right here.

The proof, Woolf said, is that law enforcement recovered more than 200 victims in the Northern Virginia area over the last two years.

Just Ask has an list of local resources on human trafficking on their site.