"We are deeply troubled by the way that this shameful raid was carried out at a place where people were seeking sanctuary from the cold," said Nicholas Maritz, an attorney with the Legal Aid Justice Center.
Listen now to WTOP News WTOP.com | Alexa | Google Home | WTOP App | 103.5 FM
(1/2) 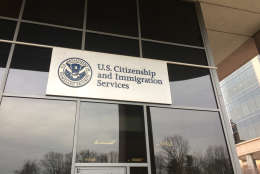 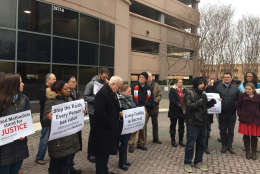 FAIRFAX, Va. — A group of about two dozen demonstrators gathered outside the Immigration and Customs Enforcement field office in Fairfax Friday and demanded more information about an immigration raid that they say happened near a church last week.

Six men were reportedly leaving a hypothermia shelter Feb. 8 at the Rising Hope Mission Church in Fairfax County when several ICE agents confronted them, put them in handcuffs and took them away.

The demonstrators, including some leaders in the faith community, criticized the agents and said such a raid violates ICE’s policy to not conduct enforcement actions near sensitive locations, such as houses of worship.

“There is a disturbance in our community that has to be addressed,” said Nicholas Maritz, an attorney with the Legal Aid Justice Center, a group that provides legal representation for low-income individuals.

“We are deeply troubled by the way that this shameful raid was carried out at a place where people were seeking sanctuary from the cold.”

Maritz said his organization is investigating what happened and is demanding more details from ICE about the how the raid was planned and carried out, as well as the identities of the people detained.

“We’re gravely concerned that some of these men’s civil rights might have been violated,” said Maritz.

The group put blame on the Trump administration’s recent rhetoric and hard-line stance on immigration, saying the president has put a target on all undocumented immigrants.

“This isn’t who we are,” said the Rev. Robert Hardies of All Souls Church Unitarian. “As a pastor I find it unconscionable that an agent of our government would lie in wait outside of a church homeless shelter to capture and deport a member of our community.”

An ICE spokeswoman said the agency’s sensitive location policy was followed. It requires agents to avoid arresting people at places of worship, schools and medical facilities. She said the arrests took place across the street and not on church property.

McAuliffe asked some pointed questions, including what criteria immigration agents are using to stop people for questioning. He said he’s concerned that ICE’s actions could lead to distrust between law enforcement authorities and immigrants over fears that some people may be “randomly targeted for deportation.”

Editor’s Note: This story was revised on March 3 to clarify the location of the church, which has an Alexandria mailing address, but lies in Fairfax County 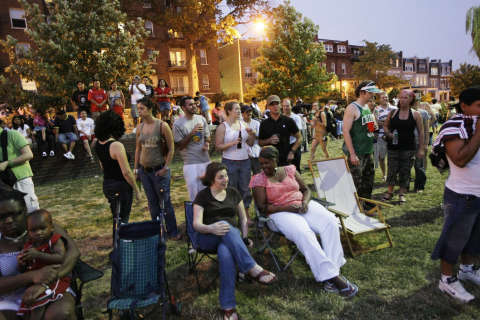