Residents in 32 units of an eight-story condominium building in the Alexandria portion of Fairfax County will likely remain out of their homes for several months after one wing of the building dropped and shifted several inches due to years of water damage.
Listen now to WTOP News WTOP.com | Alexa | Google Home | WTOP App | 103.5 FM

ALEXANDRIA, Va. — Residents in 32 units of an eight-story condominium building in the Alexandria portion of Fairfax County will likely remain out of their homes for several months after one wing of the building dropped and shifted several inches due to years of water damage.

Two adjacent buildings in the River Towers complex have similar water damage, but investigators do not believe it is as severe as the damage to 6631 Wakefield Drive.

Brian Foley, the building official for Fairfax County, tells WTOP that after a thorough investigation by a building engineer retained by the condo association, he believes “there is no imminent threat of additional collapse.”

On Oct. 2, residents of 6631 Wakefield Drive were evacuated after the front wing of the T-shaped building dropped several inches over the building’s front portico.

Residents, except those living in the front wing — each floor contains four units per wing — were able to return after an initial survey.

In recent days, the portico at nearby 6621 Wakefield Drive was bolstered with steel and scaffolding. And Monday afternoon, crews were expect to continue shoring the portico at the third structure at 6641 Wakefield.

Foley said the process of using jacks to elevate the structure at 6631 Wakefield to its original position is intricate, time consuming and must avoid putting undue stress on the sagging structure.

An exact timeline for the project has not been determined.

“This is not something that can be done in days or weeks,” Foley said.

However he said he is pleased with the structural engineering work being done by Thomas Downey, LTD.

Currently, the 32 uninhabitable units still contain the owners’ belongings. But Foley said it might be necessary to empty the units before the structure could be lifted back into place. 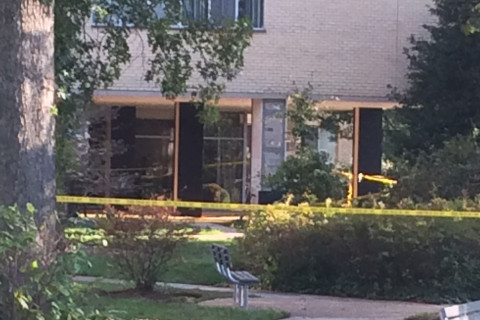 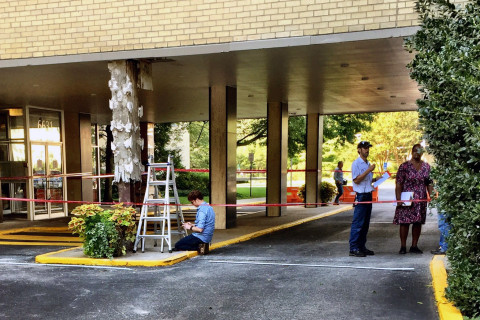