WASHINGTON — Fairfax City Police say their arrest of a homeless man who was living in a 12-foot-deep tunnel in a local park was justified after many D.C.-area residents questioned the treatment he received.

On Dec. 13, police arrested 25-year-old Yosue Joel Rios on a charge of property destruction after digging and living in a tunnel in Van Dyck Park located at 3720 Old Lee Hwy., in Fairfax.

Rios made the tunnel his home and camouflaged it by covering it with a large piece of plywood. Officers discovered a pillow, hand-held gardening tools and other personal items inside the tunnel.

Police said Friday that many people have expressed concern over the department’s actions, but police say Rios’ arrest was justified and the backfill of the hole was a public safety measure.

Upon his arrest, police say they discovered Rios was wanted for failure to appear on a traffic charge in Arlington County.

“In accordance with department procedures and law, officers were obligated to take Mr. Rios into custody based on the outstanding warrant — after which, he was transported to the Adult Detention Center,” Fairfax City Police Spokeswoman Sgt. Natalie Hinesley said in a release Friday.

“Had it not been for the outstanding arrest warrant from Arlington, Mr. Rios might have been released on a summons for the destruction of property charge,” Hinesley continued.

Hinesley added that backfilling the tunnel was crucial to safety in the park and Rios’ actions created a public danger.

“City work crews required the use of heavy equipment to backfill the site, eliminating the possibility of any children or adults from falling into the twelve-foot deep hole,” Hinesley said in the release.

“Moreover, anybody entering the cavern risked becoming entrapped due to a sudden collapse of dirt since there was no structural support.”

Rios has been made aware of the services available to homeless individuals in the regions, Hinesley says. 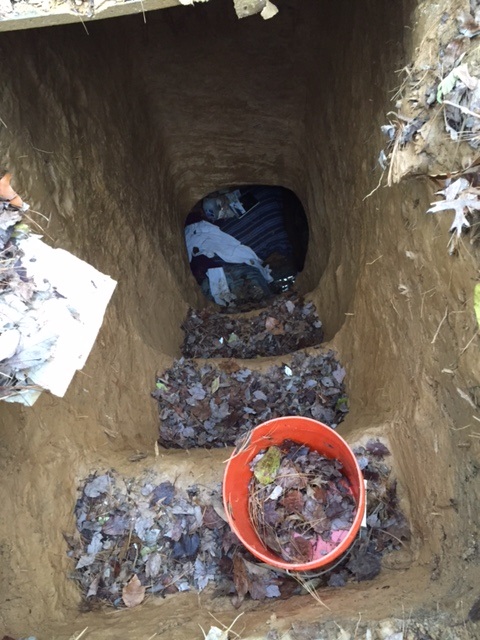