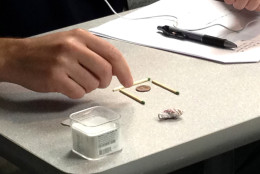 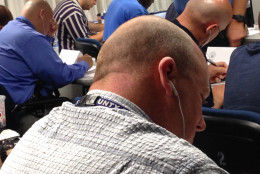 CHANTILLY, Va. — Dozens of Fairfax County police officers added iPods to their arsenal Monday, not as a new crime-fighting tool but to help them understand firsthand what living with a disorder of the mind is like.

Some schizophrenics experience auditory hallucinations like whispering, yelling and cursing every day of their lives.

During the training, officers listened to a recording of these voices while trying to answer simple math and word problems like: What is today’s date and what are the words to the national anthem?

Many officers could not answer or answered incorrectly.

“A lot of them, I couldn’t remember,” says Fairfax County Deputy Sheriff Victoria Collado. “It was kind of scary to hear those voices.”

After the 45-minute session, some officers experienced headaches, felt nauseous or angry. All of them said they were physically and mentally exhausted throughout the exercise.

“Their blood pressure went up. Their heart rate went up. They were sweating more. They were anxious. Some felt they weren’t in control, that they couldn’t turn these voices off. It was a demanding, humbling experience,” says Tom von Hemert, the Crisis Intervention Team coordinator for the Charlottesville area. He led Monday’s training.

The goal of the training is for officers to understand the struggles that millions of Americans with mental health disorders face. Even a simple instruction or task can become impossible.

“It’s hard. It’s painful. It gives them a greater awareness when they’re working with somebody of what to expect and what to do and what not to do. We’re looking for better outcomes,” von Hemert says.

“The training opens you up to know what you’re dealing with. It teaches you to work with them better,” Collado says.

Virginia recommends 25 percent of police officers receive the 40-hour training course. The Fairfax County Police Department, which hosted Monday’s session, wants all of its officers to go through the training. So far, more than 40 percent of the county’s patrol officers have completed the program.

The instruction also covers how to recognize signs of substance abuse and those developmental disabilities.