COPENHAGEN, Denmark (AP) — The leaders of Estonia and Finland want fellow European countries to stop issuing tourist visas to Russian citizens, saying they should not be able to take vacations in Europe while the Russian government carries out a war in Ukraine.

Estonian Prime Minister Kaja Kallas wrote Tuesday on Twitter that “visiting Europe is a privilege, not a human right” and that it is “time to end tourism from Russia now.”

A day earlier, her counterpart in Finland, Sanna Marin, told Finnish broadcaster YLE that “it is not right that while Russia is waging an aggressive, brutal war of aggression in Europe, Russians can live a normal life, travel in Europe, be tourists.”

Estonia and Finland both border Russia and are members of the European Union, which banned air travel from Russia after it invaded Ukraine. But Russians can still travel by land to both countries and apparently are then taking flights to other European destinations.

The calls for a travel ban have sparked outrage within Russia, from both the Kremlin and its critics. Opposition-minded public figures condemned the comments in social media posts as fueling Moscow’s anti-Western propaganda and being unhelpful in stopping the war.

“I think that over time, common sense will somehow manifest itself, and those who made such statements will come to their senses,” Kremlin spokesman Dmitry Peskov said Tuesday.

YLE reported last week that Russian companies have started offering car trips from St. Petersburg to the airports of Helsinki and Lappeenranta in Finland, which have direct connections to several places in Europe. Russia’s second-largest city is about 300 kilometers (186 miles) from the Finnish capital.

Visas issued by Finland are valid across most of Europe’s travel zone, known as the “Schengen area” which is made up of 26 countries: 22 EU nations plus Iceland, Liechtenstein, Norway and Switzerland. Normally, people and goods move freely between these countries without border checks. Nineteen other countries outside this travel area allow in foreigners using a Schengen visa.

Some EU countries no longer issue visas to Russians, including Latvia, which made that decision this month because of the war.

The visa issue is expected be discussed at an informal meeting of EU foreign ministers on Aug. 31, YLE reported.

“I would believe that in future European Council meetings, this issue will come up even more strongly. My personal position is that tourism should be restricted,” Marin told the Finnish broadcaster.

Peskov on Tuesday said calls for travel bans are usually coming from countries that Moscow has already deemed “hostile” and “many of those countries in their hostility sink into oblivion.”

Putin’s close associate and deputy head of Russia’s Security Council, Dmitry Medvedev, dismissed the Estonian premier’s statement, adding ominously: “I just want to remind her of another saying: ‘The fact that you are free is not your merit, but our flaw.’”

Zelenskyy told The Washington Post that “the most important sanctions are to close the borders” for Russian travelers, “because the Russians are taking away someone else’s land.”

Russians should “live in their own world until they change their philosophy,” Zelenskyy said, adding that such restrictions should apply to all Russians, even those who left the country and oppose the war.

It’s contrasts with what he said in March, a month after Moscow sent troops into Ukraine, when he urged Russians to leave the country to avoid funding the war with their taxes.

Asked about Zelenskyy’s remarks, Peskov, the Kremlin spokesman, called them a “statement … that speaks for itself,” which Moscow views “extremely negatively.”

This story has been corrected to show that Ukrainian President Volodymyr Zelenskyy’s interview with The Washington Post was on Monday, not Tuesday. 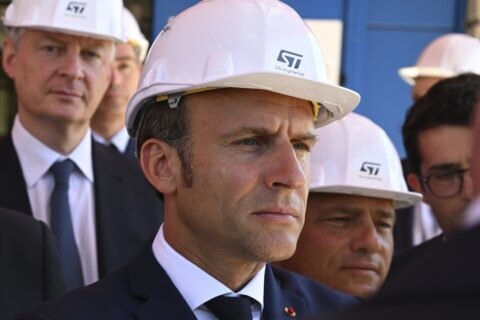