LONDON (AP) — Prime Minister Boris Johnson sought to calm stormy waters over fishing with France on Friday as he flew to Rome for a G-20 summit, where he is due to meet French President Emmanuel Macron.

France also suggested it might restrict energy supplies to the Channel Islands, British Crown dependencies that lie off the coast of France and are heavily dependent on French electricity.

Since the U.K. left the economic orbit of the EU in January, relations between London and Paris have become increasingly frayed as the nations on either side of the English Channel sort out a post-Brexit path. But after days of increasingly tense rhetoric, Johnson seemed to signal calm.

“France is one of our best, oldest, closest allies, friends and partners,” he told reporters traveling to the summit. “The ties that unite us, that bind us together, are far stronger than the turbulence that currently exist in the relationship.”

Calling Macron a “friend,” he said some people in both countries may be trying to stir up disharmony between the U.K. and France, but “I don’t think Emmanuel shares that perspective.”

But he also reiterated Britain’s willingness to respond to any violations of its divorce deal with the 27-nation EU.

“British fishermen should be confident in going about their lawful business and they should be encouraged to continue fishing in accordance with the agreement,” meaning the Brexit deal, Johnson said. “And any infraction of that agreement … by any partner, whether the French or others, is something we would obviously need to respond to.”

Britain summoned the French ambassador for a dressing-down after French authorities fined two British fishing vessels and kept one in port overnight Thursday.

Warning that “”two can play that game,” London also threatened to increase “rigorous” checks on EU fishing vessels and launch dispute talks if France does not back down. Brexit minister Lord Frost outlined the possible response at a meeting in London with European Commission vice president Maros Sefcovic, hoping to put the pressure on Paris to back down on a threat of taking action by Nov. 2.

France vehemently protested the decision last month by the U.K. and the Channel Island of Jersey to refuse some French fishing boats licenses to operate in their territorial waters. France says the restrictions are contrary to the post-Brexit agreement that Britain signed when it left the EU. The UK says some vessels need to supply more paperwork.

But Macduff Shellfish, which operates the impounded scallop vessel Cornelis Gert Jan, hit back, saying they were unaware there was an issue with the license before the incident and have sought clarification from U.K. authorities.

“Under normal circumstances, if there was an error in administration, it would have been dealt with with a phone call,” said Andrew Brown, the head of sustainability and public affairs for the company.

Instead, the ship and its crew have found themselves at the center of post-Brexit spat on the implementation of the Brexit Fishing Agreement.

“We are looking to the U.K. government to defend the rights of the U.K. fishing fleet and ensure that the fishing rights provided under the Brexit Fishing agreement are fully respected by the EU,” the company said. 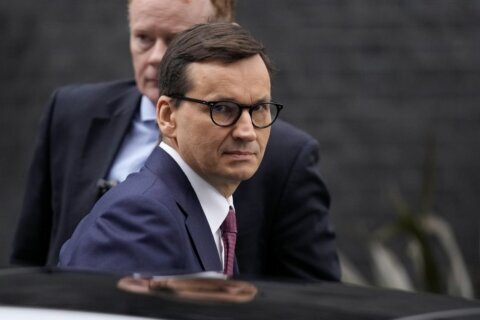