Dierks Bentley has been burning up country radio for 20 years. You’ll hear all the hits with his “Beers on Me” tour at Merriweather Post Pavilion in Columbia, Maryland on Saturday.

“We’re in for a party, man,” Bentley told WTOP. “It’s a great tour. Everyone on this tour is so fun. [Opening acts] Ashley McBryde is the real deal and so fun backstage. Travis Denning, I don’t think I’ve met anyone funnier and obviously a great singer as well.”

Born in Phoenix, Arizona in 1975, Bentley grew up listening to tons of great music.

“I grew up in a time when music was everything,” Bentley said. “There weren’t any phones and other distractions; music was what we were all into.”

His older sister loved U2, Madonna, The Bangles and Billy Idol. “My first concert was Skid Row and Bon Jovi when I was 13, so I was big on rock and metal, but my dad loved country music and he would listen to it all the time in the car,” Bentley said.

He’ll never forget the moment that he fully fell in love with country at age 17.

“I heard Hank [Williams] Jr. sing about naked women and beer,” Bentley said. “‘Who’s this guy? Rock ‘n roll guitar? Singing with testosterone? This is country music? I think I like this.’ Then just the whole class of ’89: Alan Jackson, Clint Black, Garth Brooks, Dwight Yoakam, Marty Stuart. … I was hooked and moved to Nashville two years later.”

After graduating from Vanderbilt University in 1997, Bentley signed with Capitol Nashville for his self-titled debut album “Dierks Bentley” (2003), which featured hit singles with “My Last Name,” “How Am I Doin’,” and his breakthrough smash hit “What Was I Thinking?”

“I was really pulling for a song called ‘Wish It Would Break’ … then a station in Seattle started saying ‘What Was I Thinking?’ and that was it,” Bentley said. “I’m glad I was wrong because that song is so fun. I’ve been kicking our show off with it on this tour. It’s just lightning in a bottle. I love having that in my back pocket every night.”

His second album, “Modern Day Drifter” (2005), included three takes on the concept of love with “Come a Little Closer” (a romantic bedroom song), “Settle for a Slowdown” (a pleading breakup song) and “Lot of Leavin’ Left to Do” (warning he’s a heartbreaker).

“It’s all about love; it’s just trying to come at it from all the different angles and ways we experience it,” Bentley said. “The whole range is right there, isn’t it? … I actually met my wife when ‘Lot of Leavin’ Left to Do’ was on the radio. I’m sure her parents loved that!”

His third album, “Long Trip Alone” (2006), tackled life on the road with the contemplative title track “Long Trip Alone,” an infectious free-spirited ride in “Free and Easy (Down the Road I Go)” and the cinematic visual storytelling of the smash hit “Every Mile a Memory.”

“To be sitting on the front seat of a tour bus, going down the highway with your best friends, playing shows every night, meeting people and getting back on the bus — it’s the life you dreamed of living,” Bentley said. “There’s just some lure as an American, the pull of the west, the pull of the open road and the landscapes. It’s a fun thing to write about.”

“I flew a lot of Southwest flights,” Bentley said. “I always picked Seat 7A, ‘7’ is my favorite number, ‘A’ is a window seat. … We had that 737 rocking like a G6 in the video. … At that point, I was a pilot, too. I had started flying myself to shows in little prop planes. … I don’t get drunk when I’m flying, only when I’m in the back of a Southwest plane.”

His eighth album, “Black” (2016), delivered the hit single “Somewhere on a Beach,” while his ninth album, “The Mountain” (2018), followed up with absolute bangers like “Living,” “Woman, Amen” and his hard-charging Brothers Osborne collaboration “Burning Man.”

“It had this great guitar solo spot and I loved John Osborne’s guitar playing,” Bentley said. “I thought, well heck, we can probably turn that second verse into a collaboration with T.J. It just worked out so well having them on that song. I knew they’d love it.”

Now, his upcoming 10th album, “Gone,” features the newly released single “Beers on Me,” hence the name of the tour that’s about to rock Merriweather on Saturday night.

“It’s been fun talking about my career, recapping everything,” Bentley said.

“We’ll see you down the road.” 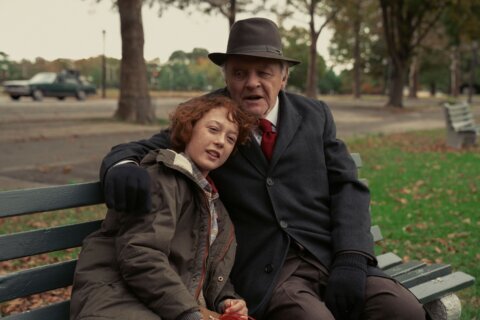