‘The Godfather’ at 50: The making of a classic

▶ Watch Video: The making of “The Godfather” You probably remember the first time you saw “The Godfather,” and by…
Listen now to WTOP News WTOP.com | Alexa | Google Home | WTOP App | 103.5 FM

▶ Watch Video: The making of “The Godfather”

You probably remember the first time you saw “The Godfather,” and by now you can likely recite all the characters’ best lines – from Clemenza’s command to a hitman (“Leave the gun, take the cannoli”), to Sonny Corleone’s instructions on how to shoot someone (“You gotta get up close like this and bada bing, you blow their brains all over your nice Ivy League suit”).

The film came out half a century ago, in March 1972, and when it did, the real mob was at the theatre; “The Godfather” broke all box office records at the time. Not bad for a film made by a director who at first didn’t even want to make it.

Back then, Francis Ford Copppla was a young filmmaker in business with another young gun, George Lucas. But when Coppola first read Mario Puzo’s book “The Godfather,” he was underwhelmed.  “I thought, ‘This is just sort of salacious, trying to make money kind of book,'” he told correspondent Tracy Smith. “And so, I disregarded it. And when they offered it to me, I turned it down.”

“What changed your mind?” Smith asked.

“George Lucas came to me and says, ‘Francis, we’re going broke. They’re gonna chain the door, for lack of paying the rent of American Zoetrope Studio. And you have to do this, we have no other alternative. We need the money.'” 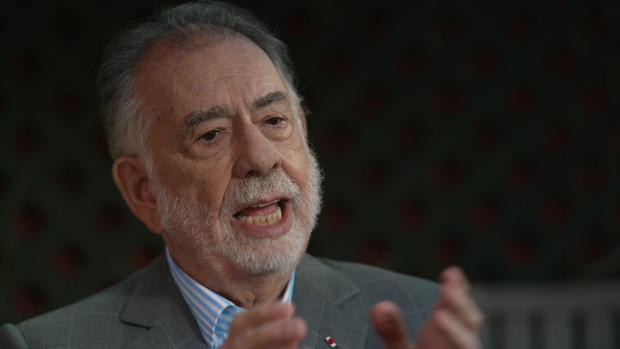 So, Coppola took the job, framing it as a dark tale of family succession, and almost immediately began to butt heads with Paramount Studio brass.

“I was very young, I was 29,” Coppola said. “I had no power. They could easily push me around, which they did and tried to.”

At 46, and in top physical shape, Brando didn’t look anything like an aging don. But with some world-class makeup, he was able to transform himself into a character he knew just how to play. 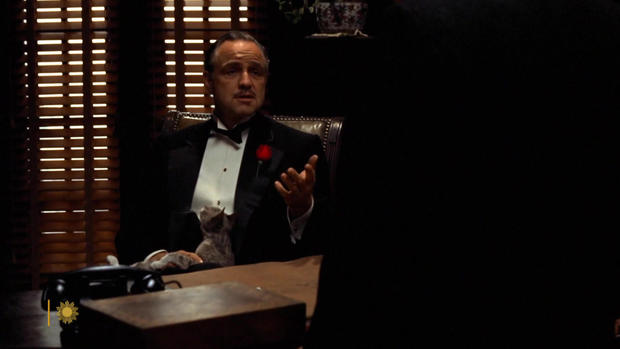 “You come into my house on the day my daughter is to be married and you ask me to do murder, for money.” Marlon Brando as Don Corleone in “The Godfather.”

The cat was Coppola’s idea: “It was a studio cat, and I just put it in his hand. He would never say, ‘What do you want me to do?’ I joke that, like, if he’s in a scene, Brando was in a scene, and a herd of buffalo ran by, in character he would say, ‘Oh, look at the buffalo!’ You know what I’m saying? He would make use of anything. He was great. He was a genius, no doubt about it.”

And talk about genius: Robert Duvall, as family attorney Tom Hagen, did this scene in two takes:

Don Corleone: “My wife is crying upstairs. I hear cars coming to the house. Consigliore of mine, I think you should tell your Don what everyone seems to know.”
Tom Hagen: “I didn’t tell Mama anything. I was about to come up and wake you just now to tell you.”
Corleone: “But you needed a drink first.”
Hagen: “Yeah.”
Corleone: “And now, you’ve had your drink.”
Hagen: “They shot Sonny on the causeway. He’s dead.”
Corleone: [sighs] “I want no inquiries made. I want no acts of vengeance. I want you to arrange a meeting with the heads of the Five Families. This war stops now.”

As always, Duvall had his lines down cold. Brando probably didn’t. “He didn’t like to memorize lines?” asked Smith.

“Yeah, well, he claimed that by seeing the lines, he could be fresher,” Duvall replied. “I think it was a form of laziness. I mean, in the scene with Pacino out in the backyard, he had a great big sign in a tree. He’d look up at the tree and say the lines from off tree way up, you know?” 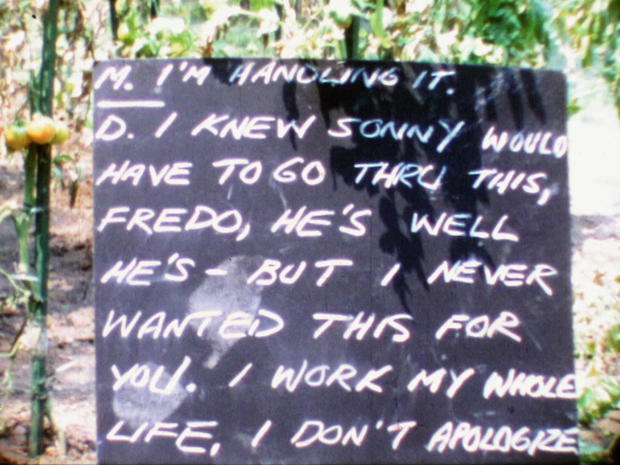 “That’s wild, but it just looks like he’s thinking.”

But even with all that talent, Coppola was in constant fear of losing his job: the studio hated his ideas, and some of the crew, he says, would bad-mouth him behind his back.

Smith showed Coppola a picture of him taken on set: “All these people here, and you look so alone.”

“Well, that’s really, this picture is how I felt during the picture. I was not a happy camper, as they say.” 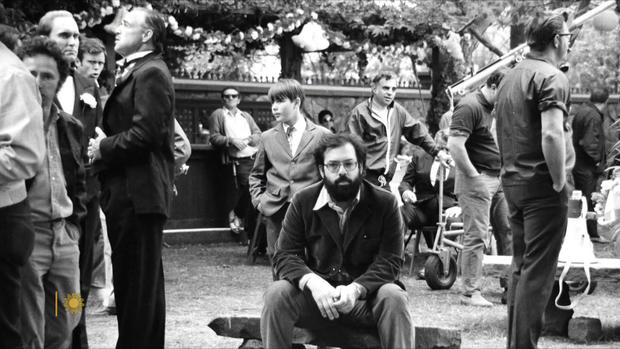 Francis Ford Coppola during filming of “The Godfather.”

But they feared the worst. Shire said, “For those first couple of weeks that we were all shooting, Francis’ job was in jeopardy. And so, a sister shouldn’t have been on that set. I will tell you that. ‘Cause it was very, very tough.”

But a turning point came after Paramount execs saw the dailies for this scene, where Al Pacino, as Michael, prepares to kill two of his family’s mortal enemies. The sound of the train helps build tension that you can feel (and see behind Pacino’s eyes) until the moment he strikes:

But for all the shoot-em-up, some at Paramount worried that “The Godfather” as scripted wasn’t violent enough.

Coppola says they actually wanted to hire someone to pump up the action in the film. So, he choreographed the violent fight scene between Shire’s character Connie and her no-good husband Carlo, played by Gianni Russo. “And I remember the plates were heavy, so I’d go [mimes smashing plates] and it wouldn’t break, and it didn’t break. And so, my shoes came off, and I kept just running around in the broken things, because you don’t want to take two. But it was intense.”

Talk about intense: For the scene where Sonny is gunned down at the tollbooth, technicians wired everything with small explosive charges, called squibs, to simulate bullet strikes. “On me, I had 147,” said Caan. “Around the tollbooth was 5,000.”

Smith asked, “Were you scared?”

The result was a shockingly realistic ballet of brutality that looked lethal, and actually could have been. Caan said, “It would blow a hole in your hand if you put your hand right here like that.”

The first “Godfather” movie won three Oscars, but it was bigger than that. It changed our culture in ways that still resonate today, from “The Simpsons,” to “The Sopranos.”

But even if you’ve seen it a hundred times, you haven’t seen it like this for a while: the studio restored “The Godfather” in time for the anniversary, so now it once again looks like the vision Francis Ford Coppola went through a kind of hell to make.

Smith asked, “I would imagine that the wounds have healed by now?”

“I don’t know,” Coppola said. “Do wounds really, I mean, do you have some episode in your life when you were a young woman that hurt you, and you think about it? Does it not hurt you anymore?”

“Because we are creatures of feelings, and those feelings get linked with something, and if you go back and think on that subject, it could break your heart again.”

Coppola, of course, went on to be recognized as one of the greatest directors of all time. And he told us that, ultimately, he’s glad he took the job.

Coppola said, “‘The Godfather’ was a new way to show an Italian American gangster film, with a different sensibility. So of course, always the movie you do that is something a little different is rejected in its own time, but years later it becomes the new. Now, ‘The Godfather’ becomes the standard to measure against. In other words, art is an ever-blossoming flower that we’re all part of. And it’s a beautiful thing, really.”

GALLERY: “The Godfather”: The 50th anniversary 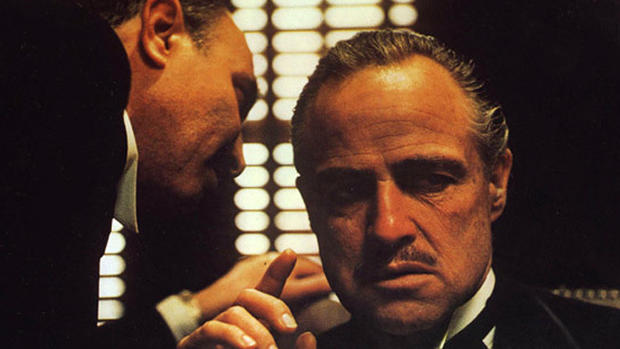 “The Godfather”: The 50th anniversary 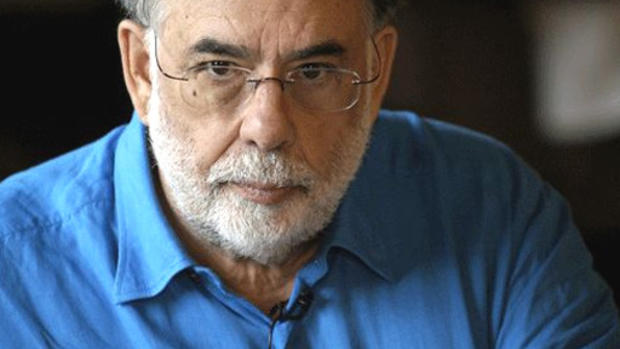 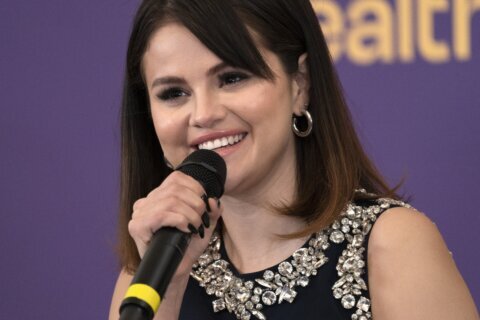 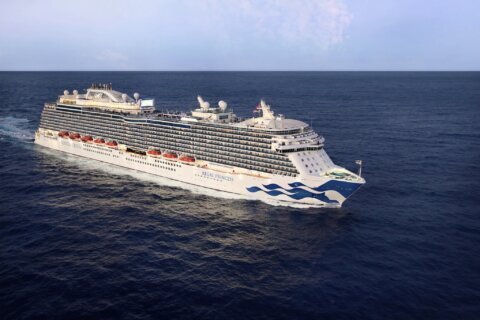