After the decline of heavyweights like Muhammad Ali, Joe Frazier and George Foreman, four middleweights strapped the sport of boxing onto their backs to electrify the 1980s.

“It’s an amazing era,” Director Mat Whitecross told WTOP. “Any one of them you could make a 10-part miniseries about, but I love the way they complemented each other. They fought each other nine times and each of them came out on top, each of them drew, each of them had their ups and downs. That’s what makes it so compelling.”

The series paints Leonard as the poster child and golden boy.

“He was considered by a lot of people unjustly as being white collar, middle class or fake,” Whitecross said. “He got tired of this idea that because he was beautiful and charismatic that he was somehow cheesy or wasn’t a real boxer with real grit. You only have to look at the endings of those fights [to see] this inner steel that’s unbelievable.”

“He would wrap himself around you and say, ‘I’m going into the fire,’ and he always believed he’d get out, and he usually did,” Atlas said. “He had every bit of that bulldog, every bit of that ferociousness, and a little extra. Yeah, he was the golden boy, but he came from nothing. … With all that talent, all that ability, the guy was a damn fighter.”

Hagler was the opposite, carrying his lunch pail and not getting his due.

“Hagler felt shortchanged by life,” Whitecross said. “He didn’t have the glamour or glitz of Leonard. … He had his first fight for $40 contrasted with Leonard’s $40,000. … Hagler always had that chip on his shoulder and it carried him to that final fight, which is so devastating. It came down to a judge’s decision, one of the most controversial in history.”

“When he fought Sugar Ray Leonard, he tried too hard,” Atlas said. “One of the greatest southpaws of all time — and he comes out orthodox. Why? Because he felt for all those years, he didn’t get his due. … He was tying his hands behind his back saying to the world, ‘You didn’t respect me enough, I’m gonna beat your golden boy orthodox.'”

Hagler’s most iconic opponent was Hearns thanks to their wild three-round fight in 1981.

“He was Mr. Detroit, who seemed to symbolize some hope, renaissance and rebirth,” Whitecross said. “His ferocious appearance, his size …  you shouldn’t be that tall, that agile with that reach and be a lighter weight. It seems impossible. … He developed this devastating right punch taught to him by Emanuel Steward, his trainer.”

“Punchers aren’t taught; punchers are born,” Atlas said. “It’s not always the big muscle guys that are the big punchers, it’s the wiry, skinny guys, they get leverage. … The first right hand [against Hagler] — bang! The world stood still. The granite-chinned Hagler, there was a split second of a shudder, but it was gone, he walked right through.”

Last but not least, we see Durán rise to glory, fall with “no más,” then rise again.

“He was the Panamanian symbol, in fact, the whole of Latin America,” Whitecross said. “Duran is a force of nature. He seemed to have a drive and energy, which came from the streets. … I remember him saying, ‘You can’t become a boxing legend unless you grew up poor.’ … He was ferocious … but when you meet him now, he’s hilarious.”

“He comes from the streets of Panama, pure poverty, fighting for money,” Atlas said. “He got everything that he had craved for, maybe too much, because it’s damn hard to get up at 5 in the morning when you’re sleeping in silk sheets. … He does, ‘No más,’ … loses that hunger, goes through years of exile, comes back [and] redeems himself.”

These personal stories are effectively intercut with world events at the time.

“I grew up in the ’80s and I remember politically a lot of things that have resonance now,” Whitecross said. “You had Reagan coming in and there are certain connections between his style of campaigning, his populism and the way that Trump connected with people.”

More than just political parallels, the series gets to the heart of the fighting spirit.

“We also want to look at the bigger picture,” Whitecross said. “Why do people box? What’s the significance of all this in what was happening culturally, socially, politically in the background? These guys were symbols for that era.”

Listen to our full conversation with Mat Whitecross here.

Listen to our full conversation with Teddy Atlas here. 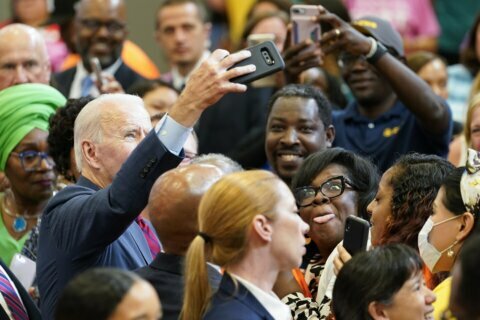