Dave Chappelle is honored with the Mark Twain Prize for American Humor at the Kennedy Center for the Performing Arts on Sunday, Oct. 27, 2019, in Washington. (Photo by Owen Sweeney/Invision/AP) 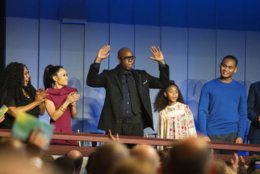 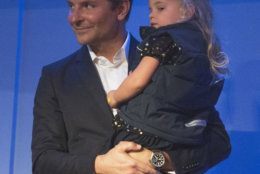 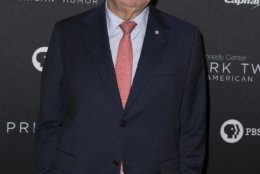 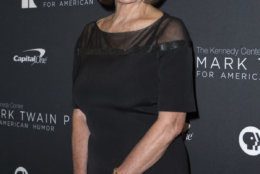 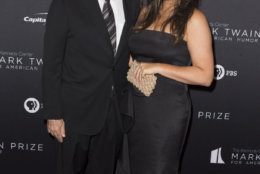 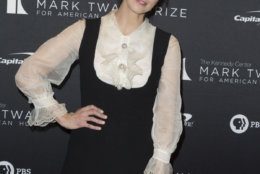 Chappelle grew up in nearby Silver Spring, Maryland before attending the prestigious Duke Ellington School of the Arts in Northwest, D.C.

“An honor like this would be special anywhere it happened, but the fact that it’s happening here in Washington does make me feel like I closed some sort of loop or circle,” Chappelle told WTOP on the red carpet. “I came home and everyone’s OK. My friends still love me, everyone looks great, I learned a lot, I realized I got old while I was gone, but I’m just happy to be alive and happy to be with my friends tonight. I’m going to celebrate.”

What was his favorite “Chappelle’s Show” sketch?

“Anything with Charlie Murphy,” Chappelle said of his late co-star, who died in 2017. “He is here tonight in spirit. I truly feel him. He was a wonderful human being. I truly have love for him and that kind of thing never dies. This connection goes through eternity.”

Then, he left the red carpet by recreating his Howard Dean fist pump.

But it was his sketch comedy show, “Chappelle’s Show” (2003) that cemented his place in history. Spoofing race relations from Clayton Bigsby to The Racial Draft, and reinterpreting pop culture icons such as Rick James, Prince and Wayne Brady, the show earned three Emmy nominations: becoming the best-selling TV show in DVD history.

Then, at the height of his fame, he walked away from a lucrative contract extension before the show’s third season, going on hiatus to Africa and disappearing from the spotlight.

As for the Mark Twain Prize ceremony, a number of celebrities turned out to pay tribute to Chappelle, who sat with his wife, kids and mother in box seats.

It all started with host Morgan Freeman taking the stage to say, “In the immortal words of Mark Twain, “Let’s go f***ing crazy!” The line kicked off a rendition of Prince’s “Let’s Go Crazy” by young musicians from the Duke Ellington School for the Arts, dancing in the aisles.

“Richard Pryor was the first recipient of the Twain Prize and when I joined ‘SNL’ he was the first person I had to get on the show,” Michaels said. “In the summer of 2016 with the election looming there was another person I was determined to have host. It had to be Dave Chappelle. Whatever the result, I knew I had to have Dave for the same reason as Richard Pryor. He’s a truth teller and the funniest person working today.”

Next, Tiffany Haddish came out wearing a Chappelle-style jumpsuit.

“I see why you wear these! These are so comfortable!” Haddish said. “Look at this room. Look at the people at this party! We’re all here because Dave brings people together in a way that nobody else in the world can. Every time I step on stage I always want to make you proud because you’re the G.O.A.T. You’re the greatest.”

“His annual jam sessions on a local farm are legendary, recently after a mass shooting in Dayton to bring comfort after tragedy, and then the most iconic jam session in 2005, when he took a group of local musicians on a bus to Brooklyn,” Legend said.

“The best hip hop and neo-soul artists, Adam Blackstone and BBE All Stars, I was on that stage before most people knew who I was with a popular artist named Kanye West. … It was a moment I’ll never forget, captured forever by great director Michel Gondry.”

The next presenter was Sarah Silverman, who’s known Chappelle for decades.

“I met Dave here in Washington D.C.,” Silverman said. “I was 19, he was 17. I said, “Come to New York City! After he graduated high school, he did! We worked at the same comedy club, the Boston Comedy Club. Dave was immediately beloved by the stand-up comedy community. … It’s perfect that you’re getting the Mark Twain Prize because you both love using the n-word in your masterpieces.”

Neal Brennan, who teamed with Chappelle to co-write “Half Baked” (1998), was next to pay tribute.

Brennan then described coming up with “Chappelle’s Show.”

“Your ability to speak your mind regardless of how anybody feels about it, that fearlessness has pierced my life. I hold your first two seasons of ‘Chappelle’s Show’ up against any sketch comedy of all time,” Thompson said.

“I had no idea you had so many old white fans. I feel like I died and went to Brooks Brothers,” Che said. “[You’re] not afraid of telling people the truth about how we feel. Nobody does it better than you, ever. We all know that we’re a part of the joke. Dave is willing to make fun of everybody, whether you’re white or gay, end of list.”

“And I’m here to celebrate Mark Twain,” Jost added. “I would like to read a brief passage form ‘Huckleberry Fin’ — ‘Huck Finn turned to his friend Jim, or as he called him … you know, maybe I don’t have to read the whole thing.”

Next, Q-Tip and Mos Def arrived to recreate an encounter Mos Def had with Chappelle outside the White House during the Bush Administration.

“Me and Dave were at a public park across the street from the White House,” Mos Def said. “Dave says, ‘You think he’s in there?’ ‘He who?’ ‘The president.’ … ‘OK, let’s go ding dong on the White House door and see if President Bush wouldn’t mind a late night visit.’ Finally after 5-10 minutes a security guard comes out with this look. Before he can say anything, Dave goes, ‘I used to live here, I just wanted to see how it is.”

After that, Bradley Cooper appeared to discuss directing Chappelle in “A Star is Born” (2018).

“That scene I did with you is probably the best scene I did with another actor,” Cooper said. “You gave me your soul on that day. I can’t believe you did that for me. … I’m just so grateful I got to meet you before I had my daughter. You taught me how to be a better man. … I’m so happy I’m alive to watch you be a human and an artist. … When you think genius, you often think aloof or socially unaware, but you are a genius where you treat everyone the same.”

After a brief performance by Eryka Badu, Aziz Ansari took the stage in salute.

“Dave Chappelle: the only person in the world with a Mark Twain Prize and grills,” Ansari said. “November 2003, I’m a junior at NYU and my mom says, ‘Are you coming home for Thanksgiving?’ ‘I say, ‘There’s a change of plans, Dave Chappelle is doing shows in San Francisco at The Punchline and I gotta go.’ She says, ‘Is that the guy who goes, ‘I’m Rick James, b****? He’s hilarious. Have a good time.”

Next up was former “Daily Show” host Jon Stewart.

“I met Dave in the early ‘90s, a 17-year-old kid cutting his teeth in the toughest comedy clubs in the country and he was shockingly formed, this young prodigy, this young Mozart,” Stewart said. “But he didn’t come a legend to met until 2005. I was at ‘The Daily Show’ and he was at ‘Chappelle’s Show.’ … Comedy Central offered him $50 million to just give us one more [season]. He walked away. It was at that moment I remember thinking, ‘Comedy Central has $50 million?’ … Dave left, but I knew that money was going to need a home. I want you to know that I raised that money like it was my own.”

Last but not least came a touching video message from Eddie Murphy.

“He is the voice of his generation,” Murphy said. “There is no one more deserving of this honor.”

“The demand for tickets tonight was greater than anything we’ve ever experienced for the Mark Twain Prize,” Rubenstein said.

Upon accepting the award, Chappelle spoke while smoking.

“I want everyone in America to look at me smoking indoors,” Chappelle said. “What are they gonna do? Kick me out before I get the prize? This is called leverage!”

In all seriousness, he thanked his family, mentors and the genre itself.

“I don’t think there is an opinion not represented in a comedy club in this country,” Chappelle said. “Man, it’s not that serious. The first amendment is first for a reason. The second amendment is just in case the first one doesn’t work out. We gotta let some air out of the ball. The country is tighter than its ever been. … There’s something so true about this genre when done correctly. I will fight anyone who gets in the way. This is the truth and you are obstructing it. I am not talking about the content, I’m talking about the art form.”

The Mark Twain Prize for American Humor recognizes individuals who have had an impact on American society in ways similar to the distinguished 19th-century novelist and essayist, Samuel Clemens … best known as Mark Twain.

As a social commentator, satirist and creator of characters, Clemens was a fearless observer of society, who startled many while delighting and informing more with his uncompromising perspective on social injustice and personal folly.

The ceremony will be broadcast to the public Jan. 7 on PBS.