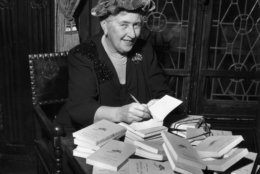 WASHINGTON — When the clock struck midnight on New Year’s Eve and 2018 clicked over to 2019, an American cultural celebration began that had nothing to do with Nick Jonas, Christina Aguilera or any of the other performers on the network Times Square shows.

On Jan. 1, works were added to the public domain in the United States for the first time in 20 years. Books, films, songs and other works copyrighted in 1922 went into public domain on Jan. 1, 1998, but the Sonny Bono Copyright Term Extension Act was passed that same year, extending the length of copyright from 75 years to 95 years. As a result, works from 1923 didn’t make it into the public domain until this month.

That includes such literature as “The Prophet” by Khalil Gibran and “Stopping By Woods on a Snowy Evening” by Robert Frost; songs such as “The Charleston” and many of the works of Jelly Roll Morton; the original silent version of Cecil B. DeMille’s “The Ten Commandments” and several comedy films by Buster Keaton.

Public domain means these works can be used and reused, altered and reworked in any way that a present-day creator sees fit. You could use the main motif from the New Orleans Rhythm Kings’ “Tin Roof Blues” in your own song; you could write a sequel to P.G. Wodehouse’s “The Inimitable Jeeves,” or rewrite it with a new ending; you could hold a showing of Charlie Chaplin’s “The Pilgrim” or jack a beat from Sergei Rachmaninoff’s “Morning, op. 4, no. 2” — all without having to ask or pay for the right to use the original.

Jennifer Jenkins, director of the Center for the Study of the Public Domain at the Duke University Law School, is psyched. Her center has been marking every Jan. 1 by calling it Public Domain Day and listing works that would have become freely available if the Bono law hadn’t gone into effect. But this time, they were able to make a list of truly public works.

“We’ve been waiting for this for 21 years,” Jenkins told WTOP, “We’re pretty excited.”

From Brooke to Bernstein

The public domain, she said, “feeds creativity.” She gives a classic example: “West Side Story,” as most fans know, takes its basic story from Shakespeare’s “Romeo and Juliet,” which was never under copyright. But Shakespeare was far from the first to write that story.

“Shakespeare was entirely free to build upon everything from Arthur Brooke’s ‘The Tragicall Historye of Romeo and Juliet’ to Ovid’s ‘Pyramus and Thisby,’” Jenkins said. “ … So the works from 1923 now join the works of Mozart, of Dickens, of Shakespeare. And we have the same freedoms that were taken for granted with those older works.”

But that’s not even the most exciting part, Jenkins said. The classic works we already know about from nearly 100 years ago are the ones that were commercially successful and thus being preserved. But after 95 years, she said, “most works are actually not commercially available at all.”

If the copyright holder didn’t think they could make any money off a work, they wouldn’t republish it, and it would slip into obscurity. But the copyright would remain.

“How many works from today do you think are still going to be commercially valuable in 50 or 60 or 70 years? Maybe Taylor Swift?” Jenkins said. “I don’t know.”

Now, resources such as The Internet Archive, The Hathi Trust Digital Library and Google Books can make less-known works available, giving us a more rounded idea of the cultural output of the times, “so we can … actually rediscover works that had been entirely forgotten,” Jenkins said.

Conservationists are excited too, especially in the film realm. Mike Mashon, head of the Moving Images Section of the Library of Congress, points out that lots of America’s film heritage is physically deteriorating: “There are plenty of films from 1923 that there are no extant copies (for).”

The Moving Images Section put two films with newly expired copyrights online Jan. 1 on their Now See Hear blog: “Daytime Wives” and “The Enemies of Women,” starring Lionel Barrymore. They say the films are only “passably” and “moderately” entertaining with some segments missing, but there’s no telling what future exhibitors and filmmakers could make of the visual or story elements.

“It’s kind of been a handful of the more well-known films that have been available for view,” Mashon said. “But there’s a lot.”

Why is public domain a big deal? Why can’t you just get permission to use a published work?

Well, you can theoretically, but it’s not always easy. For one thing, it’s not always easy to know who to ask. If the original creator has died, it can be hard — even impossible — to find who holds a copyright. “People get divorced; companies go out of business,” Jenkins said. “In many cases, you can’t even figure out who to ask for permission.” That results in what’s known as an “orphan work.”

That’s not the only problem. Copyright is also automatic, meaning a work doesn’t have to be registered with the U.S. Copyright Office, so they can’t necessarily help. Unlike other areas of the law, just having made a serious, good-faith effort to find out who owns a copyright is not good enough to protect an artist, writer or filmmaker from a copyright-infringement claim. So, a lot of people aren’t willing to take the risk.

“The Copyright Office continues to believe that this uncertainty and the gridlock it produces do not serve the goals of the copyright system,” the office wrote in a 2015 report.

The copyright office estimated in 2015 that anywhere from 17 to 25 percent of printed books are orphan works. It’s hard to know for sure, but the office cited research positing that more than a half-million books are orphans.

In such cases, Jenkins said, “No one is benefiting from copyright protection. It’s completely irrational. … 99 percent of works weren’t benefiting at all, and they would benefit from being in the public domain where people could actually find them.”

The limits of public domain

Anyone looking to use a work in the public domain still has to watch out for some pitfalls.

Lawyer Kenneth M. Kaufman, of Manatt Phelps and Phillips in D.C., said that the public domain only applies in the U.S. Works may still be protected in other countries, so a creator still couldn’t exhibit a new “derivative work” overseas. It’s also important to remember the distinction between a composition and a recording. For example, you can use the Rachmaninoff composition however you like, but, say, Dmitri Hvorostovsky’s specific recording is still restricted.

Names and likenesses may still be protected. Kaufman recalled a case in which the estate of Sir Arthur Conan Doyle tried to stop someone from using a Sherlock Holmes novel that had passed into the public domain, claiming that as long as the later Holmes novels were still under copyright, all Sherlock Holmes novels were still protected. The estate lost, Kaufman said, but still, “these have to be evaluated on a case-by-case basis.”

And even though new works are finally flowing into the public domain again, copyright terms in the U.S. are actually getting longer.

The history of copyright law in the U.S. is long. The short version is: the Copyright Act of 1790 only applied to books, setting copyright at 14 years with the option to renew for another 14 if the author was still alive. Subsequent laws have only made the terms of copyright longer and eliminated the requirement for renewal. The latest Copyright Act of 1976 said works created after 1978 cause the copyright to last for the life of the creator plus 70 years. Depending on how old the author is, that can be a lot more than 95 years.

“Everything is copyrighted, in real life terms, forever,” said Patricia Aufderheide, founder of the Center for Media and Social Impact at American University. “Nothing that we can access is really within cultural memory anymore. … There’s this huge access to our cultural legacy that doesn’t exist to our near cultural legacy.”

The expanding terms have made, and reflected, a change in the way we look at copyright, and creativity itself, she argues.

“The copyright-holding industries have worked hard to use this phrase ‘intellectual property,’ Aufderheide said. “They would prefer people to think of it as a thing, like a chair, that you can steal. And that creates an argument for ever-longer and more expensive copyrights. …

“We usually think of creativity as this original stuff that happens when you’re alone and having a fantastic idea, and creative people are very special. But creativity is widely distributed. People use creativity in every job there is — roofing and waste management and every aspect of car design. There’s a lot of creativity that makes the world go around, and it’s all building on something that already existed.”

‘Celebration’ of a ‘new present’

Jacobs said that it all adds up to make the Jan. 1 milestone “a celebration, but it’s a bittersweet celebration.”

Even with such caveats, the injection of new works into the public domain is cause for celebration, the advocates agree.

“When (works) come into the public domain, they become material for future cultural creation,” Aufderheide said. “They’re the raw material for more culture.”

Jacobs emphasized again the fact that so many of the freed works aren’t well known: “We actually don’t know what people are going to do with these things, and that’s part of the excitement.”

On Wednesday, the U.S. Copyright Office marked the occasion with an event at the Library of Congress entitled “Public Domain: Celebrating the Lifecycle of Copyright.” Karyn Temple, the acting director of the copyright office, called copyright “the engine of free expression,” but said the passage of a work into the public domain “does not represent the death of copyright; rather, it is part of copyright’s life cycle — the next stage of life for that creative work.” She called the public domain “an inherent and integral part of the copyright system.”

Amid showings of documentaries and live performances that used public-domain works, speakers included Douglas Lanier, a professor of English at the University of New Hampshire and a long-term research fellow at the Folger Shakespeare Library. He said Shakespeare’s statuses as both “the Coca-Cola of literature” and as probably the most-adapted writer in history were no coincidences.

What we know as the classics, he said, “did not begin their lives as classics,” but rather through adaptation and re-circulation. That availability to the public was crucial. “A work is effectively dead unless it has new readers and audiences, new performers and adapters, who allow it to speak to a new present,” Lanier said.

In a new series, TCM takes a look at ‘problematic’ classics

Review: ‘Klara and the Sun’ is a poignant mediation on love