This month, “The Color Purple” musical comes to the Kennedy Center now through Aug. 26.

Adapted for the stage by Marsha Norman, Walker’s timeless tale is set in the Jim Crow-era where Southern black woman Celie struggles to find her identity over four decades of abuse.

“‘The Color Purple’ is the story of a young African-American girl set back in the early 1900s,” Gregory said. “At 14, she was abused by what she thought was her father. She wound up having two children with him. He ends up selling her off to a man that everyone in the town just calls Mister. … He was a man that owned a farm [and] he makes her life a living hell.”

The role of Celie is portrayed on stage by actress Adrianna Hicks.

“She is absolutely incredible,” Gregory said. “She brings all of the nuance to this character. Not just an amazing voice, but an amazing actor. … We see this young woman flower into a woman owning her own business, breaking free of Mister’s control. It’s such an empowering, inspirational story, not just for women, not just for black people, but for everyone.”

Gregory plays Mister, who was portrayed by Danny Glover across Whoopi Goldberg and Oprah Winfrey in the 1985 film, the No. 4 top-grossing of the year with 11 Oscar nominations.

“I remember falling in love with the movie,” Gregory said. “I was there at the theater crying. It was one of the first movies that ever made me cry in the theater. Oh my god, just the end!”

As much as he loved the film, Gregory tries to push it out of his brain on stage.

“I have to divorce myself from the movie,” Gregory said. “I know Danny Glover is there. Danny Glover is amazing. He is a quintessential actor. However, I cannot try to be Danny Glover. There’s no way. I have to be Gavin Gregory. I just look at the work and bring me to the work.”

“It’s almost like a soliloquy and I love doing it,” Gregory said. “In the movie, we didn’t really get a chance to see Mister get his redemption. In the musical, Mister definitely gets his redemption and you can see it just through the transformation that happens in the song I have to sing. … Alice Walker, who was a part of bringing this alive on Broadway, said that she wanted Mister’s redemption to be highlighted like in the book. It’s definitely highlighted.”

Such character transformations are also shown via symbolic costumes.

“I change costumes twice and that happens to be removing by vest, changing from a red tie to a blue tie when I’m transfigured into a new man,” Gregory said. “With Celie, you definitely see some transformation because she sings this amazing song with the rest of the female cast called ‘Celie’s Pants.’ Celie is wearing pants, she comes out of a dress and she’s wearing these pants that she made. All of the women made them and they’re colorful and they’re beautiful.”

It’s just one of many show tunes written by Stephen Bray, Brenda Russell and Allee Willis.

“I love Celie’s 11 o’clock number ‘I’m Here.’ It is beautiful, transformative, inspirational. Adrianna sings it with the power that it needs and you actually believe her. … ‘Push the Button,’ one of Shug Avery’s songs when she comes into the juke joint, we’re having a great time, she’s like the Beyoncé of the day! … And the song ‘The Color Purple’ is beautiful.”

Which brings us to the pivotal question — what’s in a title?

“There’s a line that Shug Avery says, ‘I think it pissed God off to walk past the field and see the color purple and not recognize it,'” Gregory said. “Purple is a sign of royalty, but it’s also a sign of abuse, so purple means all of those things. You can see it from Celie’s growth, going from this troubled, used and abused young girl into this flowering, enterprising young woman. So you see her go from one spectrum of purple to this other spectrum of purple.”

Find out more on the Kennedy Center website. Hear our full chat with Gavin Gregory below: 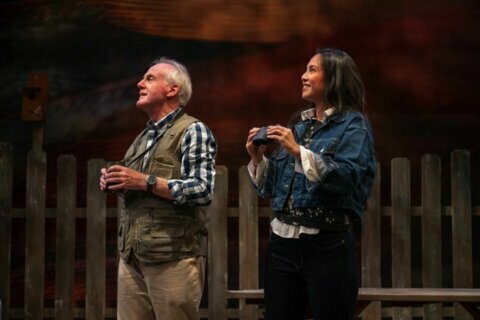 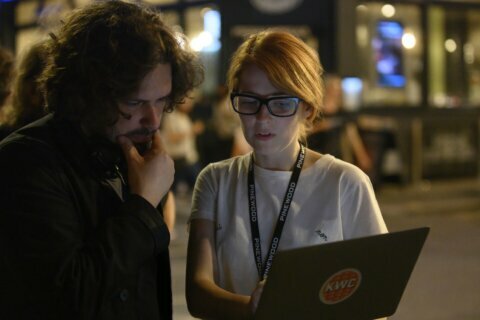