What’s the secret to its success? WTOP caught up with directors Joe and Anthony Russo.

“We love what the Marvel Cinematic Universe has been able to do since the very first film in ‘Iron Man’ and we’ve been following these stories now for 10 years,” Anthony said. “The intention of these movies is to be a climax or a culmination of everything that’s happened in the MCU up to this point, so we knew that a story of that scope and scale was a big swing.”

The film follows the Avengers’ fight against supervillain Thanos, who seeks six infinity stones so that he can depopulate the universe with the snap of his fingers. This builds to a truly shocking finale that feels like Marvel’s version of the “Red Wedding” in “Game of Thrones.”

“The stakes are clearly very high with Thanos and there are incredible costs in trying to beat him,” Joe said. Anthony added, “We have a really strong commitment to very real stakes. … Without stakes, it takes away your level of emotional investment and engagement. We love these characters as much as anybody, but all things have to come to an end. There’s a cycle to everything and these movies represent the end of the first cycle of Marvel Studios.”

Does that mean what’s done is done? Are the deceased truly dead? Or will next year’s final chapter use the infinity stones to alter time and reality in order to bring them back to life?

“We can’t comment on that,” Anthony said with a knowing grin.

Until then, we’re left with the gut-punch realization that Thanos is the franchise’s most powerful villain yet, not to mention the most complex, shedding teardrops of family grief.

“There were two reasons behind Thanos occupying the P.O.V. in the film,” Joe said. “One is that he’s been such a teased character and the expectations were incredibly high as a character. So we knew we needed to give him real estate, to flesh him out and make people view him as the most intense villain that’s occupied storytelling time in a Marvel film.”

The second reason was the gutsy originality of actually allowing the villain to triumph.

“I can’t think of another time that someone has put a film in the point-of-view of the villain,” Joe said. “We felt it would make the movie feel fresh, that the main story points in the movie are dictated by the villain. … In essence, he is on the ‘hero’s quest’ in the movie. I know that people like to point out the cliffhanger, but there’s an ending to the film. The ending is his ending — it’s just not an ending you’re used to seeing — but he completed his mission.”

While Thanos gets the biggest story arc, it’s impossible to give the two dozen superheroes equal screen time. Thankfully, most moviegoers are already familiar with these characters.

“Very rarely do you have the opportunity as filmmakers to rely upon so much emotional capital,” Anthony said. “We’ve come to know these characters over the years, we’ve come to love them, so we don’t have to do a lot of work introducing them. … Because it was so dense with so many characters, Joe and I often refer to the film as a ‘snatch and grab.’ Thanos is just on a tear … one step ahead of our characters. The movie just moves at this breathless pace.”

Amid the breakneck pace, the Russos try to maintain focus on story and character.

“Story and character are our organizing principles for everything, whether it be film structure, scene structure, the way we lay out an action sequence, etc.,” Anthony said. “We organize everything very specifically around ‘What is the story we’re telling?’ and ‘How are we exploring this character at a particular moment?’ That’s how we decided who we would give more story weight to, more screen time to, more scenes to, as we moved through the movie.”

While past installments focused on Iron Man, Thor, Hulk and Captain America, you’ll notice that Vision and Scarlet Witch get the best Avengers arc here. As for the Guardians of the Galaxy, Star Lord isn’t the focus this time; rather, it’s the family back story of Gamora.

“There are characters like Gamora, who is a daughter of Thanos,” Anthony said. “When a hero and a villain have a very personal relationship … things become very exciting. That’s one thing we loved about our first Marvel movie, ‘Captain America: The Winter Soldier’ — the relationship between Cap and Bucky Barnes being best friends but also enemies was so complex. You also see it in the relationship between Thor and Loki — brothers and enemies.”

That’s not to say the main Avengers won’t have a huge role to play. Expect Tony Stark to come full circle, having kicked off the entire franchise with “Iron Man” exactly 10 years ago.

“[He’s] been on a mission to anticipate this existential threat that is facing humanity that he knows is out there,” Anthony said. “The sense of destiny [his] character has had, he’s been moving toward a moment and figure like Thanos, that is something we wanted to run at.”

“He’s always going to play a huge role,” Joe added. “He started the Universe, he’s the leader of The Avengers against the great existential threat that haunts The Avengers, which has now manifested itself as Thanos. … He and Thanos had their faceoff, their tête-à-tête, and it’s clear that this is what Tony has always feared, so he will always play a significant part.”

Will Stark get a helping hand from Captain Marvel (Brie Larson), teased in post-credits scene?

“We cannot confirm nor deny if Captain Marvel is in that movie,” Joe said, to which Anthony added, “Her stand-alone movie is coming. … She’s a remarkable actress.”

In the end, Marvel’s 10-year franchise model has changed the way Hollywood does business.

“It’s a grand experiment in narrative,” Joe said. “Two-dimensional, two-hour, close-ended stories had an incredible run for about 100 years. I think audiences are interested now in storytelling that takes place over several years and films. … You can sit around decrying the demise of the daguerreotype or you can look toward the future. Technology has altered this generation significantly, and the way they process and consume story is very different.”

Which leaves us wondering how this entire saga will end on May 3, 2019.

“As surprising as this movie is,” Anthony said, “The next may be even more surprising.”

Listen to our full conversation with “Infinity War” filmmakers Joe and Anthony Russo below: 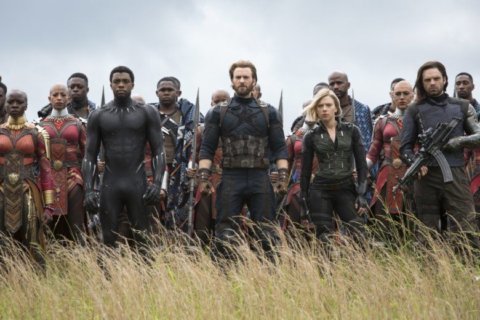