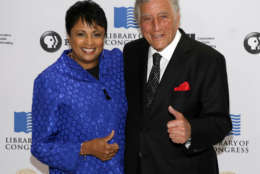 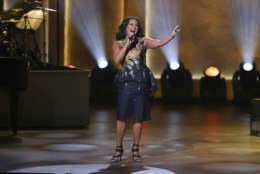 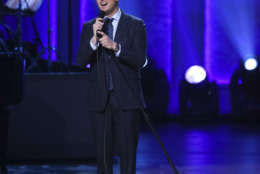 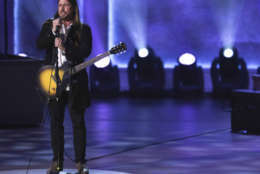 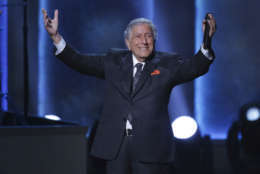 WASHINGTON — He’s won so many Grammys (19) that they might as well call them Tonys.

On Wednesday night, the Library of Congress presented Tony Bennett with the prestigious Gershwin Prize for American Song in a concert at D.A.R. Constitution Hall in Washington D.C.

“This is the best I’ve ever felt on stage,” Bennett told the crowd. “I don’t know what to say, I just know how much I love the United States. With all due respect, I record and perform all over the world, and they still haven’t topped us. We are the best country in the world.”

That’s coming from a man who served in World War II, marched with Dr. Martin Luther King Jr. and built countless schools, including the Frank Sinatra School of the Arts in his Queens.

Before the show, the 91-year-old Bennett hit the red carpet to reflect on his prolific career.

“Lena Horne is the best that I’ve ever worked with,” Bennett said. “But I’m definitely going to do another song with Lady Gaga on New Year’s Eve.”

When asked what he was going to do, he quipped, “Make a lot of money!”

“Tony has that indescribable nuance and pathos to his voice that always tells a story with warmth and understanding in a way that draws you in,” Josh Groban told WTOP. “Every time I get a chance to sing next to the guy, it’s a master class. … I continue to be inspired by the guy. … It’s been one of the great honors to know him, to work with him and to honor him tonight.”

How did Groban react when he got the call to perform?

“You slide around in your apartment in your socks for a minute,” Groban joked.

As a moviestar, Willis appreciates Bennett’s contributions to film as well, such as Martin Scorsese using “Rags to Riches” in the iconic opening scene of “Goodfellas” (1990).

“He never stops,” Willis said. “I don’t know the secret, but he sure looks good.”

Not only does he look the part, his voice remains intact and instantly identifiable.

“You hear three notes and you know it’s Tony Bennett,” Gloria Estefan told WTOP. “He’s able to work with everyone. Look at the work he did with Lady Gaga, that amazing album that won a Grammy and a No. 1 Billboard. He continues to grow. He’s really someone to look up to.”

During the show, Estefan gave the crowd goose bumps singing “What a Wonderful World” in a duet with Stevie Wonder, who also performed “If I Ruled the World.” Vanessa Williams sang “The Best Is Yet to Come,” while Michael Bublé sang “The Very Thought of You.”

“People have a way of knowing when things are timeless and classic,” McDonald told WTOP. “I feel like that’s when something’s relatable, strong and kind of just hits you in the heart.”

It all built to the moment when Bennett himself took the stage, crooning his signature song “I Left My Heart in San Francisco” and saluting the Gershwins with “Our Love is Here to Stay.”

“George and Ira Gershwin? You don’t get better than that,” Bennett said.

The entire Gershwin Prize ceremony airs on PBS on Jan. 12.