WASHINGTON — She was saluted at the 2015 Kennedy Center Honors.

This Saturday, “EGOT” winner Rita Moreno returns for a Q&A with Kennedy Center board chairman David M. Rubenstein, who launches his new “Profiles in Creativity” series of sit-down conversations.

“I’m flattered to damn pieces,” Moreno told WTOP. “It’s all of the previous honorees of the Kennedy Center. He had the idea, which I think is actually quite a marvelous one, because some astonishing people have been honored [but] it’s going to be on the record for a change. … I’m thrilled to be the first one! … I’m also delighted I’ll be in the archives. Wow! For a little Puerto Rican girl, my dear!”

Just like her signature career song “America,” Moreno was born on “that lovely island” of Puerto Rico in 1931, before her seamstress mother Rosa María moved her to “the island of Manhattan” in 1936.

“My mom brought me to another island [saying], ‘We’re going to another country! And it’s called New York City!’ It was terribly difficult. It was painful, it was sad, it was bewildering. I was 5 years old and I could not understand why my mommy would want to move from this beautiful paradise in which we lived to this place that was freezing cold, where the trees had no leaves, which was no end of wonder to me. I kept saying to her, ‘What’s wrong with the leaves?’ And she said, ‘It’s this thing called winter.'”

Not only was it a climate adjustment, it was a social struggle with race relations before the civil rights movement, which she references in the song: “Life is alright in America, if you’re all white in America.”

“Let’s be realistic: It’s not great now, but it was really bad then,” Moreno said. “It’s gotten better; the door is certainly more than ajar. There have been wonderful improvements, but we still have a long way to go. You’re reminded of that just about every day; all you have to do is open up the newspaper. … But I wanna go on record: This is still one of the greatest countries ever. Just a wonderful country.”

Indeed, Moreno epitomizes the American Dream. She made her Broadway debut in “Skydrift” (1945) before recording Spanish dubbings of American films. In 1949, she moved to Hollywood on a seven-year contract with MGM, making her film debut as Rosita Moreno in “So Young So Bad” (1950) before being cast as Zelda Zanders in Stanley Donen & Gene Kelly’s “Singin’ in the Rain” (1952).

“To be a part of ‘Singin’ in the Rain’ was just staggering to me,” Moreno said. “[It was] a little part, but I’m so proud to have been a part of that. … Gene Kelly, that was my dream for heaven’s sake! I had a seven-year contract with MGM Studios. … That was the studio of my dreams! That was the studio that made all the great musicals. … Judy Garland was there, [Fred] Astaire was there, Ann Miller.”

Among a stable of such superstars, Moreno bonded with fellow newcomer, the late Debbie Reynolds.

“She and I were both youngsters under contract with MGM, and she got the break,” Moreno said. “We became friends and she was quite hilarious, and she was very cute and funny. … One time, she asked me to keep her company [before] performing at a high school show. I went to her house and sat while she was changing. She said, ‘OK, I’m ready,’ went to the bedroom door and said, ‘Wait, I almost forgot!’ She went to her dresser drawer, took out two giant powder puffs and stuck them in her bra!”

Four years later, Moreno starred in another major musical, this time for 20th Century Fox, playing the tragic servant Tuptim in Walter Lang’s “The King and I” (1956). Just as she had with Debbie Reynolds, Moreno got to know her co-stars Yul Brynner and Deborah Kerr on a very intimate, hilarious level.

“Yul was hilarious. He had the potty-mouth of all time,” Morneo said, laughing. “Deborah befriended me because I was the only other leading female. She loved panties with naughty sayings. … She would call me to her dressing room, poke her head out and say, ‘Rita! Come here!’ Then she’d lift up those voluminous skirts she wore in the movie and say, ‘What do you think of this?’ Isn’t that delicious?!?”

More importantly, “The King and I” was her first of two films with choreographer Jerome Robbins.

Ironically, Moreno admits she was too nervous to audition for the stage version of “West Side Story,” which made its pre-Broadway debut at the National Theatre in Washington, D.C., in 1957. Instead, the role of Maria went to native Washingtonian Chita Rivera, who became an instant Broadway star.

“Jerome had asked me to audition for the play,” Moreno said. “When the time came, I just didn’t have the guts. I had done too many movies where you could always do it again if it doesn’t go right, and I was just too scared to do it. Happily for the audience, Chita Rivera was pretty fabulous as Anita. I did go to see the play after it opened [on Broadway] and I remember thinking, ‘I think this was a mistake.'”

She got a second chance in the 1961 film adaptation, featuring all the same great music by Leonard Bernstein and lyrics by Stephen Sondheim, but this time co-directed by Robbins and Robert Wise.

“Jerry was all for making us crazy, insecure and tearful,” Moreno said. “He was a very tough man and also kind of sadistic. They were a huge contrast together. Bob Wise was very calm, sweet, thoughtful, but interestingly enough, he was not the director Jerry was. Jerry was very dynamic, sharp and edgy [and] Bob was exactly the opposite. But as afraid of Jerry as all of us were, to this day, if he were alive and said, ‘Rita, I want you to do a play or a film with me,’ I would drop everything. He was a genius.”

If Robbins gave “West Side Story” its snap-dancing genius, Wise delivered a more cinematic quality, having started as an editor on Orson Welles’ “Citizen Kane” (1941). He was bumped up to finish directing the end of “The Magnificent Ambersons” (1942) after Welles was kicked off the project.

“What we have to remember about Robert Wise, to give him his due, is he was an absolutely great editor,” Moreno said. “So some of those glorious cut-to’s in ‘West Side Story’ and also in ‘The Sound of Music’ were his! … There were some crazy, wonderful cuts in that movie and I’d say it was Bob.”

Together, they captured magic between Moreno and George Chakiris, the Bernardo to her Anita.

“Aside from his gorgeous looks … he had a quality that you rarely, rarely see in dancers,” Moreno said. “George had an elegant style that was just unbeatable. You look at those old movies; nobody moved the way he did. … Other than Astaire, I can’t remember anybody who had that quality. … Whenever I see the movie, at least once a year, I don’t look at anyone else. Even in ‘America,’ I don’t look at me, I look at him.. … We’re still friends. We were always close. We were each other’s dates for the Oscars.”

“We were very busy making up sour-grapes speeches because we were so sure we were gonna lose, and they were funny speeches, too,” Moreno said. “George and I have always laughed a lot together. He’s hilarious, I’m hilarious and we just have this gorgeous synergy. It was the apex of my life at that time and for George as well. The movie just swept the awards, which was thrilling beyond belief.”

After “West Side Story,” she earned a second Golden Globe nomination for the film “The Ritz” (1976), reprising her Tony-winning Broadway role across Jack Weston, Jerry Stiller and F. Murray Abraham.

But in the late 1970s and early 1980s, Moreno was forced to shift focus to the world of television.

“You know what it’s called? Not being offered anything else in movies,” Moreno said. “A lot of actors went to TV when they couldn’t get film jobs. Think about all of the actors who were in movies and somehow went to television, at a time when television wasn’t the most respected thing in the world.”

Regardless, television proved a welcome home, earning her a Grammy for the soundtrack of “The Electric Company” (1973), starring Morgan Freeman, Mel Brooks and Zero Mostel; winning two Emmys for “The Muppet Show” (1976) and “The Rockford Files” (1974); earning a third Golden Globe nomination for TV’s “9 to 5” (1982) across Valerie Curtin and Sally Struthers; and entering the new millennium with roles in HBO’s “Oz” (1997-2003) and currently Netflix’s “One Day at a Time” (2017).

If you’re keeping track, that makes Moreno a rare “EGOT,” having won an Emmy, Grammy, Oscar and Tony. She’s also captured the Triple Crown of Acting with an Oscar, Tony and Emmy. She was awarded the Presidential Medal of Freedom by President George W. Bush in 2004, the National Medal of Arts from President Barack Obama in 2009, and the aforementioned Kennedy Center Honors in 2015.

“Oh please, when it happens to you, I don’t even know if there are proper words for such an honor,” Moreno said. “It was a star-lit night for me. It was just an extraordinary, extraordinary experience. So gorgeous. I’ll betcha anything that a lot of people have forgotten that two people who are not quite as famous as they are now were honoring me on stage: That’s Lin-Manuel Miranda and Gina Rodriguez.”

All these years later, does Moreno’s Anita have any words of peace between the Sharks and the Jets?

“I think she’d tell the Jets to get lost, frankly,” Moreno told WTOP on the red carpet. “I don’t know that she’s going to be that kind. She’d say to the Jets, ‘Get lost! Get out of here. Get off my turf!'”

Click here for more information on Saturday’s Q&A. Listen to the full conversation with Rita Moreno below: 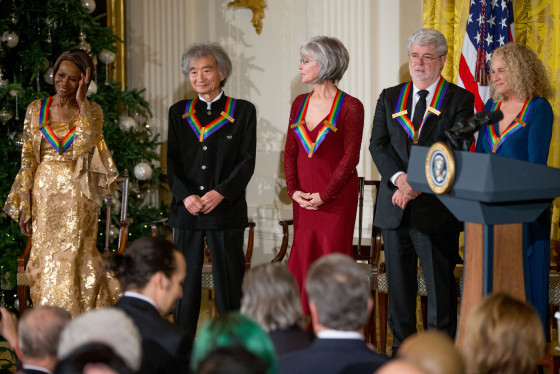 Browse through photos of the 38th annual Kennedy Center Honors, held on Dec. 6, 2015.