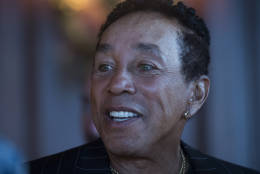 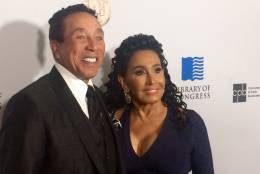 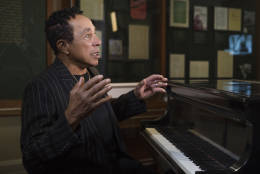 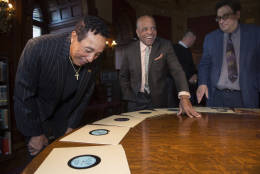 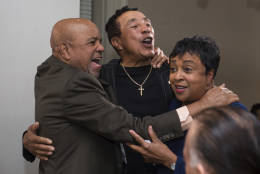 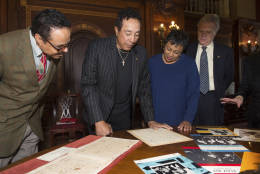 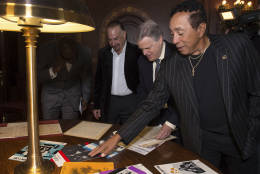 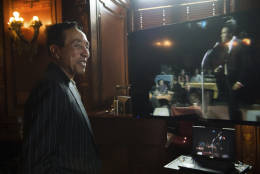 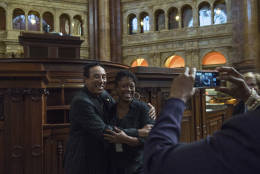 WASHINGTON — His soft, silky-smooth voice and swift pen made Motown history, sparking a 50-year career in which he composed more than 4,000 songs.

Many were jams he voiced for his dynamite doo-wop group The Miracles: “Shop Around,” “Tears of a Clown,” “Tracks of My Tears,” “I Second That Emotion” and “You’ve Really Got a Hold on Me.” Others were smash hits he penned for other artists, including The Temptations’ “Get Ready” and “My Girl.”

“To be mentioned in the same breath as a songwriter with the Gershwins? I can’t beat that,” Robinson told WTOP. “I grew up listening to the Gershwins. That was some of the first music I ever heard in my life as a baby in Detroit growing up. I had two older sisters and my mom, they played all types of music. The Gershwins were prevalent in my house. Now, I’m getting the Gershwin award? Incredible.”

Growing up, his Detroit neighborhood was filled with future superstars like Diana Ross.

“She lived four doors down the street from me, Aretha Franklin lived right around the corner, the Four Tops lived right across the avenue — we had a lot of people in our neighborhood,” Robinson said.

But it was meeting Motown founder Berry Gordy that changed his life.

“How could I forget that, man?” Robinson said. “He was a songwriter in Detroit. He had written all the songs for Jackie Wilson, who was my No. 1 singing idol as a kid. To meet him was very dynamic.”

Likewise, Gordy also felt something special from the start.

“I knew right away that he and I would be great friends, but I had no idea that it would last over 50 years,” Gordy told WTOP. “Being my best friend for over 50 years, we’re always anxious to be there for each other and being here today is just the icing on the cake for me. You can’t beat it.”

All these decades later, Smokey’s influences are countless, apparent in all the younger stars who showed up to pay tribute during the ceremony, including Grammy winner Corinne Bailey Rae.

“I’ve been listening a lot to ‘Ooh, Baby Baby,’ which I’m performing tonight,” Rae told WTOP. “There are melodic moments in that song that I recognize in different people’s art. I can hear a particular line that makes you think Carole King … is influenced by Smokey Robinson. I hear Smokey sing, ‘I’m crying,’ and I think about [The Beatles’] ‘I Am the Walrus’ … The same lyrics and the same melody.”

“Smokey Robinson is one of our all-time greats and a living legend,” Green told WTOP. “I am the surrogate son of Smokey Robinson. Obviously! I’m a Miracle!”

Actor Samuel L. Jackson says the first Smokey record he ever bought was “Shop Around.”

“I’m glad to be here celebrating Smokey. He’s my friend, I’m glad he asked me, it’s a great honor,” Jackson said with a smile, before sparring with a fellow D.C. reporter’s biting political question.

“That is such a tough question, like when did I take my first step?” JoJo told WTOP. “I don’t remember a time when Smokey’s music wasn’t a part of my life. I was a huge Jackson Five fan, The Temptations. … This is such an honor to be singing his songs. They’re just part of the American classic repertoire.”

JoJo performed Smokey’s “Cruisin'” in a duet with R&B singer-songwriter Gallant, who grew up between D.C. and Columbia, Maryland, before studying music at New York University.

“I was in this play in D.C. called ‘Runaway Home,’ I was like 8, 9 or 10,” Gallant told WTOP. “Smokey Robinson was most of the soundtrack, so for six months, that’s all I would hear. So it just kind of embedded itself even deeper within me, let alone my family was huge Motown fans. They played songs he sang, songs he’s written. He makes up such a huge portion of everyone’s musical palette.”

Grammy-winning gospel legend BeBe Winans says he has a long history with Robinson.

“When someone that I love is honored, it is important for me to be present,” Winans told WTOP. “We used to live a block away from each other. Me and my brothers used to shovel Smokey’s snow when it would snow in Detroit, Michigan, because he would give you a little bit more money than the other people. So all the children would dash to his house. So you take that to when we crossed paths in our music careers … he’s just one of those people you don’t mind giving to, because he keeps giving to us.”

Appreciation for Smokey isn’t limited solely to R&B, soul and gospel. His appreciation even crosses into country music stars like Tegan Marie, the youngest member of the Country Music Association.

“Motown is very similar to country because the roots are very similar. My parents used to always play country music and Motown,” Marie told WTOP before performing a “My Guy” tribute on stage.

“I first discovered Smokey as a very young kid,” Moore told WTOP. “My dad, I had two brothers, we would all get in his Silverado truck and we’d drive about an hour and a half to the coast. We did a lot of flats fishing. So it was a lot of Smokey, the bands that Smokey wrote for, The Temptations. He was a massive Motown fan: Sam Cooke, Otis Redding. Motown has been in my blood since I was born.”

“‘The Tracks of My Tears’ is my all-time favorite,” Moore said without hesitation. “It is the most amazingly sad lyric on this happy melody, which is always a tough thing to do as a writer. That’s a tough thing to pull off, and he did it in the best way with that song. It’s a beautiful song.”

In fact, that song’s lyrics are perfect for Smokey’s latest venture — the skin care line Skinphonic.

“We have two different products,” Robinson said. “The treatment for the men is called ‘Get Ready,’ and the one for the ladies is called ‘My Girl.’ … It actually heals whatever is going on with your skin.”

WTOP suggested a new tagline for the product: “Take a good look at my face.”

“That’s a great idea,” Robinson laughed. “You should’ve been there! That’s incredible!”