Read about how the tree lighting will affect D.C. traffic Thursday.

WASHINGTON — If the holiday season promotes “peace on earth” and “good will toward men,” who better to light the National Christmas Tree than peaceful poets Crosby, Stills & Nash?

The trio will perform at the 93rd annual event, along with Fall Out Boy, Aloe Blacc and the U.S. Coast Guard Band. Other celebrity guests include Miss Piggy and Reese Witherspoon.

The event kicks off at 5 p.m. Thursday on the Ellipse just south of the White House, airing live on PBS and online, co-presented by the National Park Foundation and National Park Service.

David Crosby, Stephen Stills and Graham Nash joined WTOP to preview the event and discuss their prolific careers, including the formation of “CSN” in 1968, the addition of occasional fourth member Neil Young in 1969, and the induction of all four artists into the Rock and Roll Hall of Fame.

“Put down that turkey,” Nash says. “I just wanna wish you a very, very Happy Christmas.”

When you think holiday music, you probably think of Bing Crosby, not David.

Yet, there he’ll be on Thursday, singing “Silent Night” against a White House backdrop.

“It’s what they told us to sing,” Crosby admits. “I would have done maybe ‘Good King Wenceslas just went out on the feast of Stephen,’ that one, I like that one better. It’s a good melody. But this one is the one they asked us to sing, so we’ll sing it. We’re cooperative guys.”

Ironically, the group did cover Bing’s “White Christmas,” but Crosby doesn’t remember it.

“We’ve sung just about everything one time or another. I don’t remember that, but there’s a lot of stuff I don’t remember, but I can’t figure out why,” Crosby says with a knowing, winking tone, no doubt referencing the proverbial decades of “sex, drugs and rock ‘n roll.”

Those “fuzzy” memories include Crosby’s start with the ’60s band The Byrds, who gave us such songs as “The Ballad of Easy Rider,” and, one of Crosby’s favorites, “Turn, Turn, Turn.”

“I love that one,” Crosby says. “The verses are actually out of Ecclesiastes in The Bible, and Pete Seeger is the one who put it to music and made it into a song. I always really liked it. I thought it was a really good sentiment and really well done.”

So which line in that song applies most to today’s state of global affairs?

“‘A time for peace, I swear it’s not too late,'” Crosby says without hesitation. “We don’t have peace, as usual, and we would like to. … We need peace, we need to not be sending our kids off to war, and if we can celebrate that at Christmas, that would be a good thing.”

Stephen Stills is perhaps the most outspoken of the bunch in his progressive politics.

Bursting on the scene as a member of Buffalo Springfield, Stills wrote the legendary peace anthem “For What It’s Worth.” Which lyrics from that song apply most to today?

“‘There’s a man with a gun over there.’ There’s so many guns out there and it’s silly and it just bodes for exactly what’s happening. Shoot first and ask questions later,” Stills says. “I’ve played for Carter, Clinton and Obama, if you had any doubts about my political leanings.”

Stills says he’s been a political junkie ever since his childhood when he huddled around a TV in his hometown country store to watch Dwight D. Eisenhower in the 1950s. But he hasn’t been thrilled with the nation’s direction in the decades since, pointing to one turning point in particular.

“The murderous ’60s when they killed all of our leaders,” Stills says, alluding to the assassinations of John F. Kennedy, Bobby Kennedy, Malcom X and Martin Luther King Jr. “It’s just gotten worse and worse, when our wonderful Senate Majority Leader (Mitch McConnell) walked out and said, ‘All we have to do is make Obama a one-term president.'”

“I’m just holding my breath for this next election. It’s the strangest political season I’ve ever seen in my life, and at 70, that’s saying something,” he says. “The leadership of the free world is not supposed to be a reality show, it’s supposed to be a considerate debate on the issues … So I hope the clown car will empty out soon, and we can actually get down to basics.”

Can the holiday season end the partisanship?

“We can hope. We all know that’s wishful thinking,” Stills says. “I just hope race relations will get better and America will introduce themselves to each other and not be so polarized.”

The band rattled off plenty of British hits, some of which crossed over to American radio, including “I’m Alive,” “I Can’t Let Go” and “Stop, Stop, Stop.”

While The Hollies dominated the charts with hits like “Long, Cool Woman in a Black Dress” and “The Air I Breath,” Nash found perfect harmony with Crosby, Stills & Nash, who formed at the urging of Cass Elliot of The Mamas & The Papas.

“If it wasn’t for Cass Elliot, none of this would have been happening,” Nash says. “I have a feeling she knew what the three of us would sound like singing together before we did. She knew I was unhappy with The Hollies, she knew that Springfield had broken up, she knew that Crosby & Stills were trying to get some duo action together, and I think Cass really knew what we would sound like.”

“I came from England to America to be with Joni Mitchell, and David & Stephen were there, and we started to sing together that night in Joni’s living room,” he recalls.

Crosby, Stills, Nash & Young soon delivered an upbeat cover of Mitchell’s “Woodstock,” which memorably played under the end credits of the 1970 documentary of the same name.

Along with “Woodstock,” the group rattled off numerous hits, including “Wasted on the Way,” “Suite: Judy Blue Eyes,” “Ohio,” “Our House” and “Just a Song Before I Go.” Arguably their biggest hit was “Teach Your Children,” written by Nash back when he was a member of The Hollies, but not recorded and released until the CSNY album “Déjà Vu” in 1970.

“I’ve tried to analyze the success of that song, and I just come down to the fact that throughout the world as I travel, I realize that people want the same thing. They want a better future for their children, and with that human desire for a better world for their kids, I think ‘Teach Your Children’ kind of taps into that, and I think that’s why it’s so popular.”

So after decades of original hits, what’s it like coming together to select a Christmas carol to perform in the nation’s capital during the annual National Christmas Tree Lighting?

“We wanted something that was reasonably simple and beautifully melodic, and ‘Silent Night’ is the perfect example of that,” Nash says. “We just finished 11 countries in five weeks, and we took a couple of weeks off from each other, so we didn’t really rehearse it a lot. But we rehearsed it this morning and it sounds pretty good.”

While the rehearsal went smoothly, Nash admits he’s surprised at the size of the tree.

“I personally thought the tree should be like 800 feet high! I could put this one in my pocket,” jokes Nash, adding that the White House backdrop makes up for it. “You can’t beat that.” 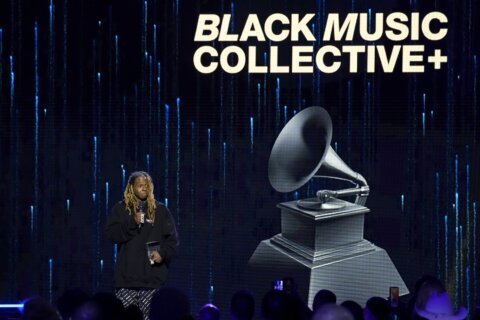