WASHINGTON — What a fitting release date for the guiltiest of guilty pleasures.

True to the book, the film follows virginal college student Anastasia Steele (Dakota Johnson), who gets an assignment to interview mysterious billionaire Christian Grey (Jamie Dornan) for the student newspaper. He takes an instant liking to her, showering her with gifts, tracking her movements and ultimately seducing her into his world of S&M (Sadism and Masochism).

This twisted world of dominants and submissives requires various nondisclosure agreements and consensual sex contracts, something the innocent Anastasia is reluctant to do. She would rather go to dinner and a movie, like in a normal relationship; he would rather tie her to the bedpost and whip her, due to his own abusive past and an unfortunate conflation of passion with punishment.

There’s plenty wrong with this movie, but for the sake of fairness, let’s start with the good. The setup contains two welcome surprises for any viewers who come in expecting utter trash.

First, Johnson’s performance is surprisingly compelling. This is a far cry from Kristen Stewart in “Twilight” (2008). The daughter of Oscar nominee Melanie Griffith and Golden Globe winner Don Johnson, the 25-year-old Dakota may very well be a diamond in the rough. We feel her naivety and torn emotions of falling for someone who has deep, dark reasons for not expressing it in return.

Second, the sex scenes are surprisingly tame, thanks to the tasteful eye of British director Sam Taylor-Johnson, wife of “Godzilla” star Aaron Taylor-Johnson. The filmmaker has several BAFTA nominations to her credit, and you can see why, as the camera tilts away from the nudity to capture a reflection in a ceiling mirror, or uses the shadows of rain drops to symbolize teardrops, a nifty trick Richard Brooks used in “In Cold Blood” (1967) and Alexandre Moors used in “Blue Caprice” (2013).

In “Fifty Shades,” we never quite feel the danger. There are a few spanks, hands bound by neckties and feet tied to sex rings, but nothing that makes our jaws drop in fear for Ana. No doubt this was an attempt to make the steamy source material appeal to the widest possible movie audience, but by the time Christian says, “I’m 50 shades of f*cked up,” we don’t buy it. It’s more like “50 Shades of Tame.”

As such, the problem isn’t that the sex scenes resemble pornography; it’s that the other scenes do, functioning as thinly-drawn excuses to get back to the action. When Christian says, “I’d like to know more about you,” we agree. When Ana replies, “There’s really not much to know about me,” we disagree. There must be more to know about her! But the script never bothers to explore it.

Ultimately, your reaction to the movie will depend on your familiarity with the material. Viewers will fall into three categories: those who loved the book, those who hated it, and those who never read it.

If you loved the book…

…you’ll enjoy the movie. It boasts a sexy soundtrack, led by Danny Elfman’s score, Beyonce’s dark remix of “Crazy in Love” and Annie Lennox’s cover of “I Put a Spell on You,” which beckons movie memories of Jim Jarmusch’s “Stranger Than Paradise” (1984). It boasts classy cinematography by Seamus McGarvey, who earned Oscar nominations for “Atonement” (2007) and “Anna Karenina” (2012). And it boasts fresh faces to sell the “good girl transforms the bad boy” archetype.

If you hated the book…

…you’ll have to admit the movie is an improvement — at least for the first half. Granted, that’s based on a very low bar. By all accounts, the dialogue is much improved over the book’s cheesy prose, thanks to screenwriter Kelly Marcel, who co-wrote the Disney movie “Saving Mr. Banks” (2013).

Still, your hatred for the book will come roaring back throughout the second half of the movie, which suffers from the novel’s same intrinsic plot flaws. Each time we think we’re about to dissect the characters’ back stories, we’re immediately interrupted for less interesting scenes.

As Christian dines with his family at the dinner table, we hope to get some insight into his roots, only for Christian to excuse himself and take Ana on a piggyback ride outside. This wastes the talent of the supporting cast playing Christian’s family members, namely Marcia Gay Harden, who won an Oscar as Tim Robbins’ wife in “Mystic River” (2002), and Rita Ora, who performed the Oscar-nominated song “Grateful” in “Beyond the Lights” (2014). They should be on-screen more often.

Even more frustrating is a scene when Anastasia leaves town to visit her mother in Georgia. At long last, we think we’re about to dissect the mother-daughter relationship that informs Ana’s idea of love. Instead, Christian immediately shows up, steals her away from drinking cosmos and takes her flying on an airplane — one of several flying scenes used to mask a serious lack of subplots.

If you didn’t read the book…

…you’ll walk out perplexed by all the hype. You’ll find yourself intrigued for the first 30 minutes, thanks to a well-paced setup that takes its time introducing the characters with just enough mystery to keep us engaged. But around the time the Red Room is introduced, you’ll begin to lose interest — ironic, considering this is precisely when our involvement should ramp up.

The second half of the movie becomes very one-note, returning to the same redundant plot points so often — the bedroom — that we don’t even realize we’re in the finale when the end credits arrive.

When “Kramer vs. Kramer” (1979) ended with a closing elevator, it felt satisfying because we had explored every angle of Dustin Hoffman and Meryl Streep’s tumultuous relationship. The result was an Oscar for Best Picture. When the “Fifty Shades” elevator shuts, viewers will gasp out loud: “Wait! What? That’s it!??” That’s because the film hasn’t given us enough to feel fulfilled.

Chalk it up to the current state of Hollywood’s sequel-driven system. Mind you, there’s nothing wrong with sequels, as long as they’re each self-contained stories. You can make “Raiders of the Lost Ark” (1981) and still make “Indiana Jones and The Last Crusade” (1989) because they’re each complete journeys — one a quest for the Ark of the Covenant, one for the Holy Grail.

“Fifty Shades” beckons a sequel — but not in a good way. James has admitted that her book was inspired by “Twilight” fan fiction, and while the Ana-Christian relationship recalls Bella and Edward, the real parallel is the “Breaking Dawn: Part 1” and “Breaking Dawn: Part 2” release model.

Experienced viewers will yearn for the days when movies pushed the sexual envelope, but did so with self-contained, fully-fleshed stories. After “Fifty Shades,” do yourself a favor and rent Mike Nichols’ “The Graduate” (1967), which Grey references in his Mrs. Robinson remarks, or John Schlesinger’s “Midnight Cowboy” (1969), which remains the only X-rated movie to win a Best Picture Oscar.

Despite its book-to-screen improvements, “Fifty Shades of Grey” feels unsatisfying. If this movie were sex, it’d be great foreplay, followed by redundant maneuvers and an anti-climactic finish.

The above rating is based on a 4-star scale. See where this film ranks in our Fraley Film Guide. Follow WTOP Film Critic Jason Fraley on Twitter @JFrayWTOP and hear his movie reviews Friday mornings on 103.5 FM. 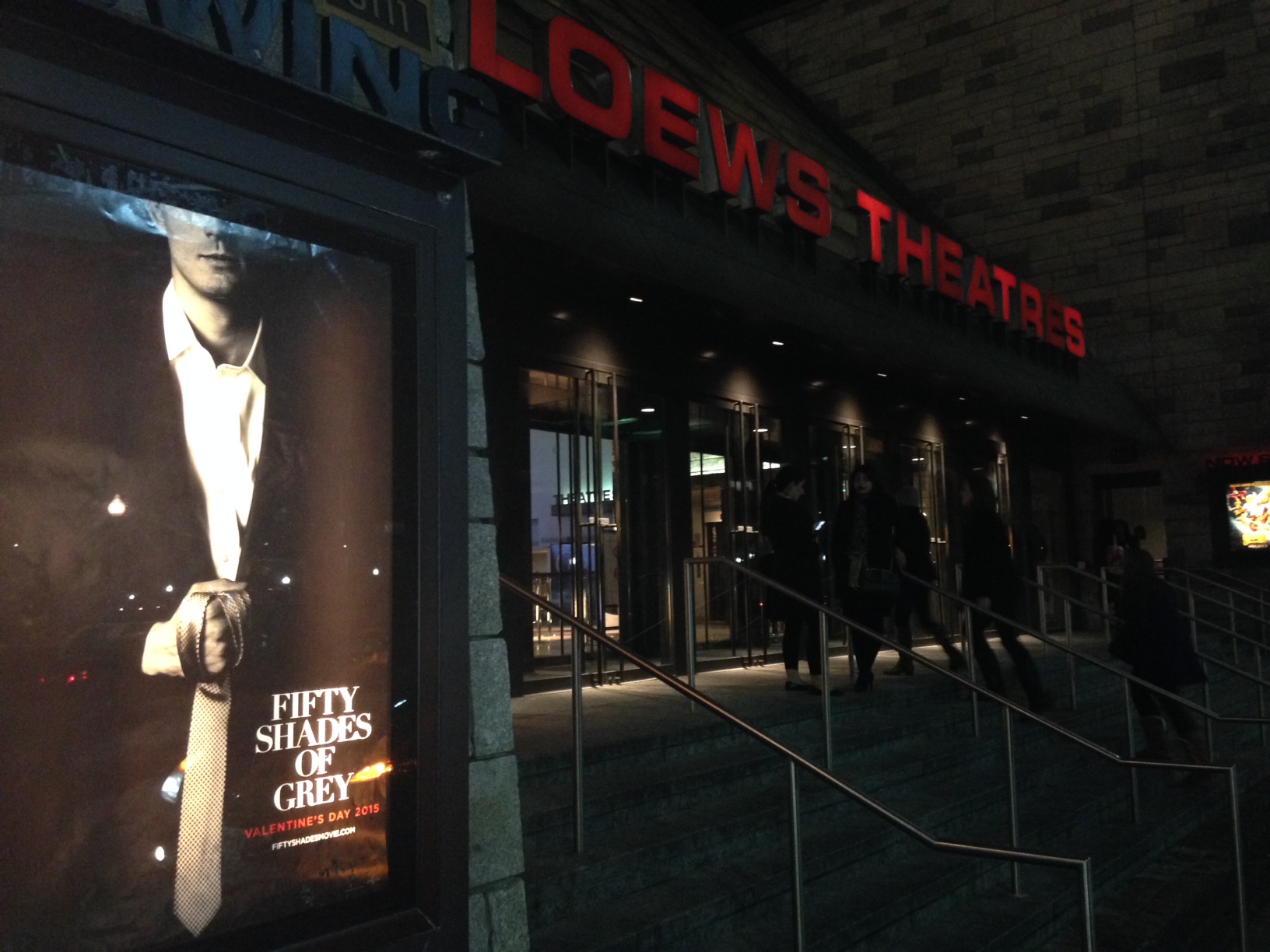