Democratic vice presidential nominee Tim Kaine has said he followed all the laws for reporting gifts and the "vast majority" of the spending was for work-related travel.
Listen now to WTOP News WTOP.com | Alexa | Google Home | WTOP App | 103.5 FM

WASHINGTON — Democratic vice presidential nominee Tim Kaine says revelations he accepted more than $160,000 in gifts and travel during his eight years as governor of Virginia and lieutenant governor are not comparable to the scandal that embroiled his Republican successor in the Virginia statehouse.

Republican presidential nominee Donald Trump has been vocal in comparing Kaine to former Virginia Gov. Bob McDonnell, who was convicted in 2014 of public corruption for accepting gifts and loans totaling $175,000 from the CEO of a dietary supplement company in exchange for promoting the company’s products. (In June, the Supreme Court overturned that conviction).

At one point, Trump even erroneously tweeted that Kaine “took far more money” than McDonnell.

However, Kaine has said he followed all the laws for reporting gifts, which included $5,500 in clothing and an $18,000 Caribbean vacation, according to Politico, which culled through data released by the Virginia Public Access Project. McDonnell’s loan scandal involved gifts that were not publicly disclosed, such as a $6,000 Rolex watch.

“In Virginia, we have very clear ethical rules,” Kaine told WTOP’s Mike Murillo in an interview. “You have to annually report either gifts received by your office or work-related travel. And I did.”

The vast majority of the spending was for work-related travel, Kaine said.

“When I travel to do economic development to bring jobs to the state, I have to report the value of that travel,” Kaine said. “If I travel to help political candidates, the taxpayer shouldn’t pay for that. So, campaigns pay for it. And I have to report that. So that wasn’t a gift; this is just work that I’m doing.” 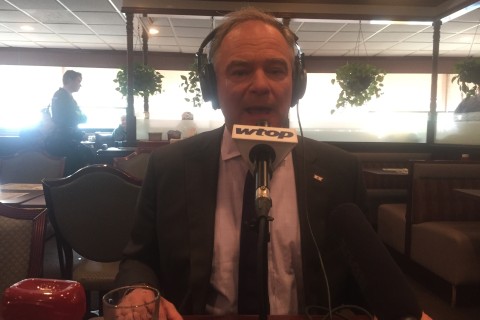