The U.S. Supreme Court has overturned the corruption convictions of former Va. Gov. Bob McDonnell, in decision that could have wide-ranging impacts on what can and cannot lead to credible criminal charges for politicians across the country.
Listen now to WTOP News WTOP.com | Alexa | Google Home | WTOP App | 103.5 FM

The court agreed with McDonnell’s argument that the instructions given to a federal jury in Richmond were overly broad. The decision reined in the definition of what is an “official act” while still upholding the underlying federal corruption statutes used to prosecute the couple.

The decision sends the case back to the Fourth Circuit Court of Appeals to determine whether there is sufficient evidence to convict McDonnell and if so, the case would be retried.

Chief Justice John Roberts wrote the decision for the court.

“There is no doubt that this case is distasteful; it may be worse than that. But our concern is not with tawdry tales of Ferraris, Rolexes, and ball gowns. It is instead with the broader legal implications of the Government’s boundless interpretation of the federal bribery statute. A more limited interpretation of the term ‘official act’ leaves ample room for prosecuting corruption, while comporting with the text of the statute and the precedent of this Court,” Roberts wrote.

“Setting up a meeting, calling another public official, or hosting an event does not, standing alone, qualify as an ‘official act’,” Roberts wrote.

Prosecutors alleged that McDonnell took five separate officials acts to benefit businessman Jonnie Williams. McDonnell and his wife, Maureen, were convicted in 2014 of taking $175,000 in gifts and loans from Williams in exchange for promoting vitamin products for Williams’ company, Star Scientific.

The gifts themselves were allowed under Virginia law at the time.

The attorney who argued the case on behalf of McDonnell called the decision a “home run,” The Associated Press reported.

Noel J. Francisco said the justices “completely embraced” the theory of McDonnell’s case and rejected the government’s argument. Francisco told The Associated Press that a new trial is unlikely.

The opinion handed down Monday morning could make it more difficult for prosecutors to bring public corruption charges in the future, according to Citizens for Responsibility and Ethics in Washington.

“The Supreme Court today held that although the governor and his aides took action — with state resources — on behalf of the business, those actions do not go far enough to constitute ‘official actions’ without prosecutors proving still more, creating an additional hurdle before corrupt conduct is considered illegal,” the nonprofit watchdog group said in a statement. “The Supreme Court essentially just told elected officials that they are free to sell access to their office to the highest bidder. If you want the government to listen to you, you had better be prepared to pay up.”

But McDonnell, former state attorneys general and even White House legal counsel all argued in court that the conviction criminalized ordinary tasks that politicians regularly perform on behalf of the people they represent — an argument that Roberts agreed with:

“Conscientious public officials arrange meetings for constituents, contact other officials on their behalf, and include them in events all the time. Representative government assumes that public officials will hear from their constituents and act appropriately on their concerns. The Government’s position could cast a pall of potential prosecution over these relationships. This concern is substantial,” the decisions says.

The favorable ruling for McDonnell is also huge relief for Virginia lawmakers who have had to grapple with the repercussions and calls to tighten up the state’s ethics and campaign finance laws.

“For those of us who have worked with Governor McDonnell and known his family for the nearly quarter century he devoted to serving the people of Virginia, this has been a wrenching and difficult time,” Senate Majority Leader Tommy Norment said in a statement. “But throughout these last two years under what had to be unbearable circumstances, his dignity and grace has confirmed the confidence placed in him by the people of Virginia when they elected him governor.”

The federal investigation that plagued McDonnell’s last year in office and his ultimate conviction marked a dramatic fall for the popular governor, who was once considered a possible vice presidential candidate. McDonnell was once a county prosecutor and later served in the House of Delegate before running successfully for attorney general. His 2009 election for governor put him among the top all-time vote-getters in the state.

But the trial, and even letters of support from the McDonnells’ daughters, featured sordid details about the couple’s personal lives and their rocky marriage.

McDonnell was the first Virginia governor ever convicted of a crime.

The U.S. Attorney’s office said it was reviewing the ruling.

Timeline of the McDonnell corruption trial

Possible outcomes for ex-governor McDonnell after trip to Supreme Court 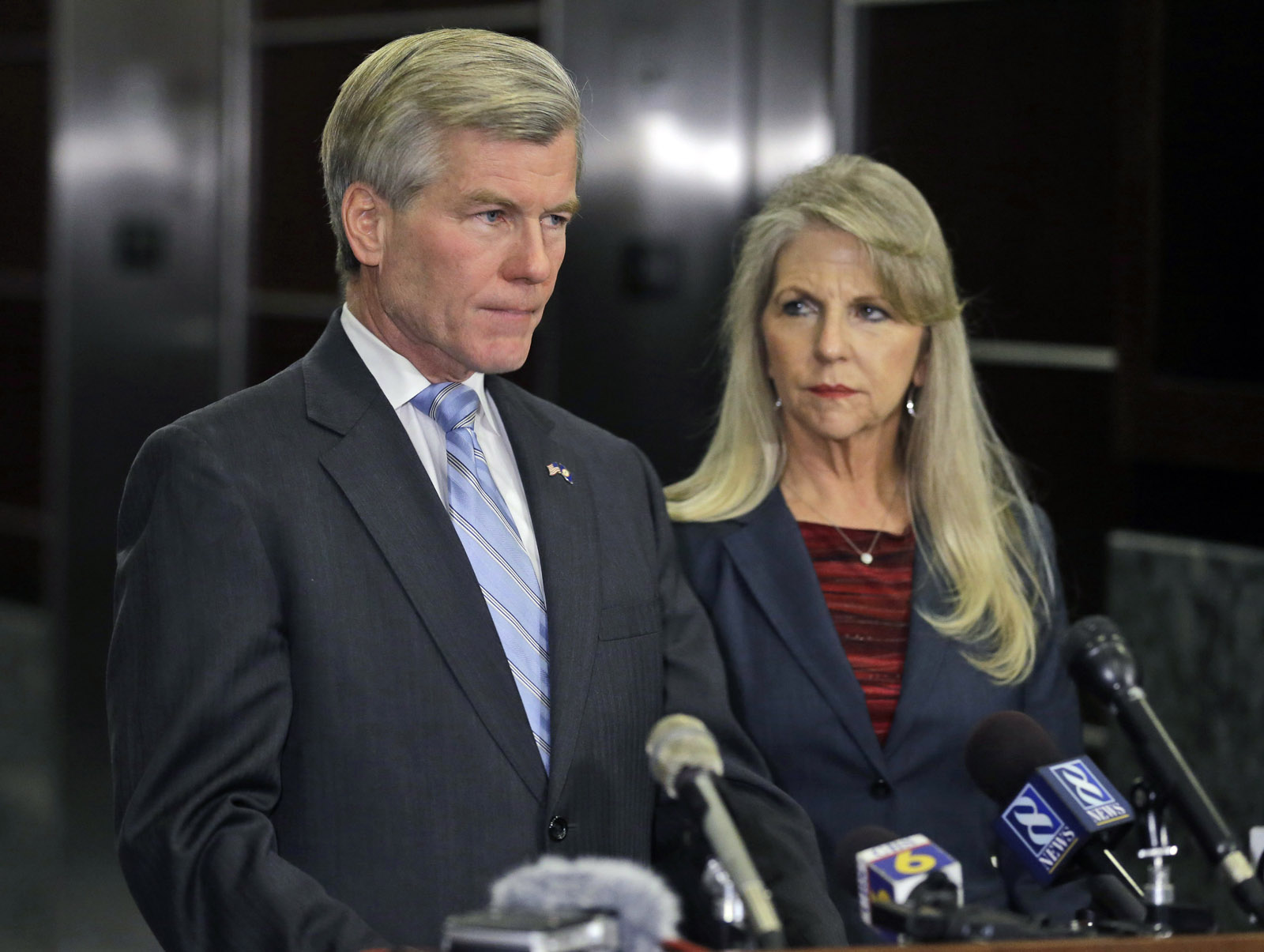