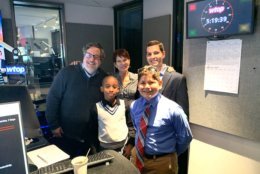 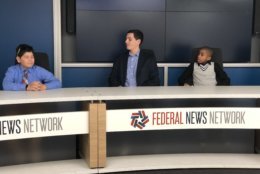 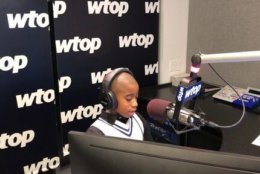 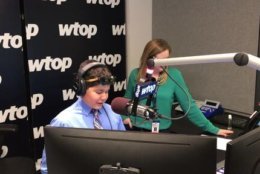 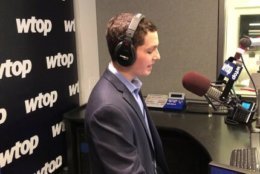 Each student took home $1,000 for themselves, another $1,000 for their school, and was treated to a special tour of the WTOP studios.

They explored the Glass Enclosed Nerve Center, went behind the scenes in the WTOP Traffic Center, met some of the news anchors and traffic reporters, and even got behind a studio microphone to try their hand at reading news and weather reports.

And here are the winners:

In his video, Jonathan Ojimba, a 7-year-old second grader at St. Mary’s School in Landover Hills, Maryland, sits at a table covered with empty plastic bottles.

He talks about how long it takes for one bottle to decompose in a landfill, and at the halfway mark he interjects an emphatic, “Wow!”

It’s a topic that is important to him. “When you recycle, you’re loving the Earth, and you’re caring for it.”

While visiting WTOP, Ojimba was happy and excited, but during the selection process, he had his doubts on his chances of winning.

“I thought I wouldn’t win because I saw all the videos that were cool too,” said Ojimba.

He plans to use part of his prize to make “blessing bags,” filled with items like hand warmers and socks, for the homeless and poor for Christmas.

“I’m going to save the rest in my college fund and for soccer practices because I really like soccer,” Ojimba said.

He submitted a video showing off his hometown.

“I’m used to being out in my town of Poolesville … I’m part of the community. I’m in the Boy Scouts of America. We do work for the community, and we do service projects,” said Velasquez, who describes his town as inviting and warm.

“I don’t think you’re going to find anywhere else that’s just like that,” he said in his video.

Velasquez plays viola, violin and piano. Someday, he wants to be a music teacher.

When he learned he was one of the contest winners, he celebrated in his fifth period music class by asking the teacher to play “We Are The Champions” by Queen.

“I worked hard on my video, but really, I wouldn’t have won without the support of my friends,” he said.

As for the prize money, “I want to save it up for a new computer,” Velasquez said. “I do a lot of video editing and music editing, so I want to get some more software, more upgrades.”

Hunter Walterman is a junior at Montgomery Blair High School in Maryland, and with college on the horizon, he knows what he is going to do with his winnings.

“It’s going to go into my college savings account to help me go to school,” he said.

The 16-year-old is a sports reporter for the school’s daily, student-produced TV news program, and his winning video tells the sensitive story of how a high school football game took an unexpected turn when a player was injured, and an ambulance was called.

“When I found out that I won, I was just super excited because it’s a really awesome honor,” said Walterman, who is interested in a career in sportscasting and is in the process of looking at journalism schools.

“Probably my top one is Maryland, just because it’s really close and it has a really great sports journalism program,” Walterman said. He is also considering Missouri and Arizona State.