One woman has been killed and another injured after they were struck in D.C. by a driver fleeing the U.S. Secret Service.
Listen now to WTOP News WTOP.com | Alexa | Google Home | WTOP App | 103.5 FM
(1/3) 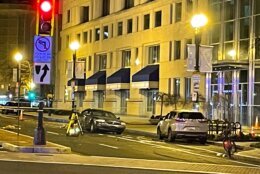 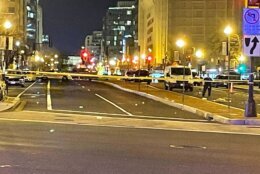 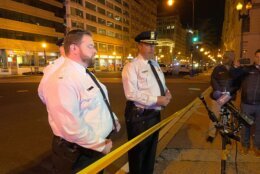 One pedestrian has been killed and another injured after they were struck in D.C. by a driver fleeing the U.S. Secret Service on Friday.

It happened near 14th Street and New York Avenue in Northwest near the White House.

“The suspect fled at a high rate of speed; and as he went through the intersection, he struck a vehicle and then he struck two pedestrians,” Mayhair said.

Vito Maggiolo, a spokesman with D.C: Fire and EMS, said the two pedestrians, both women, were in what he described as critical condition immediately following the crash.

One witness told WTOP’s Kyle Cooper, who reported from the scene, that the driver jumped out of the car, went over to the sidewalk and drank something in a plastic bottle. The witness also said that the driver, who had been arrested, struck other vehicles and pushed them out of the way as he fled.

The crash and the investigation closed New York Avenue near the White House in both directions.

The WTOP Traffic Center said it was a “big tie up” in the area, and the closure also affected traffic on H Street Northwest.

WTOP’s Veronica Canales and Kyle Cooper, who reported from Northwest D.C., contributed to this report.