A young father from Baltimore who was killed in D.C. this week is being remembered for his service to the community.

Aryeh Wolf, 25, was shot Wednesday afternoon while installing solar panels, D.C. police said. Authorities have released video of a person of interest in the shooting taken from a nearby surveillance camera.

Wolf was a former camp counselor at Camp Simcha, a New York camp for children with chronic illnesses.

Chai Lifeline, the international children’s health support network that runs the camp, tweeted that Wolf will always be remembered for his “chesed (kindness) and dedication to helping others.”

It is with a heavy heart that we inform you of the tragic death of Aryeh Wolf Z”L, a beloved former @CampSimcha counselor who we will always remember for his chesed and dedication to helping others. pic.twitter.com/Ifll4js4mO

Jack Langer, who worked at the camp with Wolfe in 2014 and 2015, described him as someone with a “pure soul.” While the two hadn’t spoken in several years, Langer told WTOP he was shocked when he heard the news.

“For this to happen to anyone, it’s shocking and wild, and especially someone who was as good as him — it really just does not make sense,” said Langer. “We don’t know how much time we have on this earth, but we should be like Aryeh, just being kind to everyone and trying to make the world a better place,” he added.

Wolf leaves behind a wife and 6-month-old baby. His funeral was on Thursday.

D.C. police said that at about 3:40 p.m. on Aug. 10, officers found Wolf with a gunshot wound on the 5100 block of Call Place. He was rushed to an area hospital where he was pronounced dead.

Police have released surveillance footage and a photo of someone they’re calling a person of interest in the shooting and are offering a $25,000 dollar reward that leads to the arrest and conviction of the person responsible.

Anyone with information about this case is asked to call the police at 202-727-9099. Additionally, anonymous information may be submitted to the department’s TEXT TIP LINE by sending a text message to 50411. 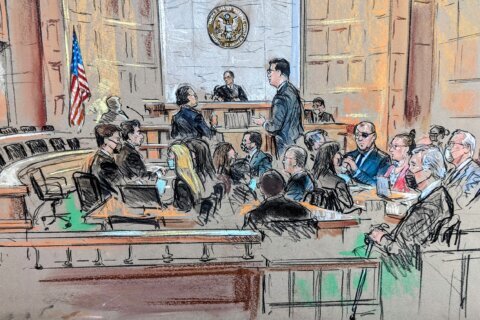 DC residents say they can be impartial as potential jurors in Oath Keepers trial, but emotions remain raw over Jan. 6 attack