Friday marked 31days since some Howard University students began their occupation of the school’s Blackburn University Center building to protest a range of concerns they say the school has not addressed. “I did think that it would have to go this far,” said Aniyah Vines, founder of The Live Movement, which is the group that organized the protest.
Listen now to WTOP News WTOP.com | Alexa | Google Home | WTOP App | 103.5 FM
(1/7) 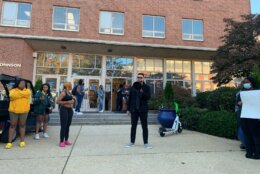 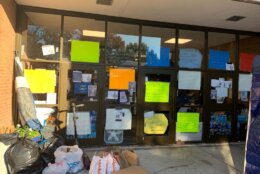 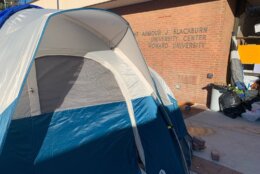 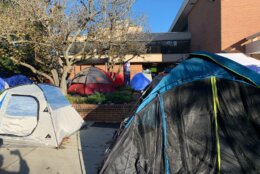 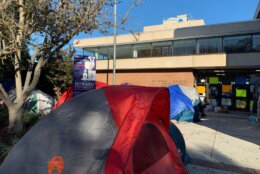 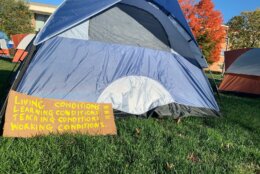 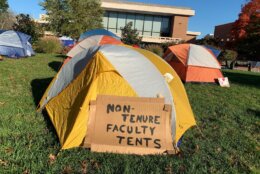 Friday marked 31 days since some Howard University students began their occupation of the school’s Blackburn University Center building to protest a range of concerns they say the D.C. school has not addressed.

Among the concerns raised by the group are conditions at student housing buildings which some said include mold and rodents. Those gathered also claimed there’s not enough university-run housing available, the school’s COVID-19 response hasn’t gone far enough and that the university needs more student voices on its board of trustees.

“By the administration not answering us and letting this go to 31 days, it’s showing not only us but the nation and most likely the world at this point that they don’t really care about the students,” said Vines.

To mark the 31st day, students staying at the encampment, which consists of dozens of tents, marched from Howard University’s Plaza Towers to the school’s administration building where they rallied. Sharing a bull horn, students stepped up to let their frustration’s be known.

“The resolving of my mold issues was spray painting the mold in my shower, I kid you not,” Makaiya Hicks, 19, a sophomore at Howard told the crowd.

Hicks said conditions in her suite have included finding what looked like “mushrooms” growing in her bathroom. She joined the protest out of love for the school and blamed the school for trying to end the occupation by threatening action against the students participating.

During his State of the University Address, the school’s president, Wayne A.I. Frederick said mold was reported in 41 of the university’s 2,700 rooms with some of the damage the result of accidental human error. He also said that the absence of students in school buildings due to COVID-19 also allowed conditions to worsen.

Frederick acknowledged that more needs to be done when it comes to preventive maintenance of the buildings, which are maintained by Corvias, a contractor hired by the university.

For the students rallying on Friday, they said the address didn’t go far enough or answer their demands.

Those demands included information on where the money they pay for housing is going, a town hall with Frederick, voting rights for students on the board of trustees, and amnesty for students participating in the protest. Until then, the students, including freshman Mason Calhoun, 18, plan to keep their encampment in place.

“I feel like the only way that we can make a change is if we make our voices heard and stop at nothing to make sure our voices are heard by the people that need to hear it,” Calhoun said.

WTOP has reached out to Howard University for comment but did not receive a response ahead of publication.