So far this year, the murder rate in DC is trending 10% higher than it was at this time a year ago, and the total number of killings in the District is more than the city saw in all of 2019.
Listen now to WTOP News WTOP.com | Alexa | Google Home | WTOP App | 103.5 FM

So far this year, the murder rate in DC is trending 10% higher than it was at this time a year ago, and the total number of killings in the District is more than the city saw in all of 2019.

In fact, the 172 homicides recorded so far this year in D.C. surpass the total number of killings in any year since 2008.

One of the most recent killings was Saturday night, when a man was killed in front of Watkins Elementary in the Capitol Hill neighborhood. It was the second time in about a week and a half someone died on that block. It’s also in Ward 6, which is represented by Charles Allen, who chairs the Judiciary and Public Safety Committee on the D.C. Council.

It meant another heavy dose of criticism would be directed his way by residents who say the city isn’t prioritizing public safety the way it should be.

“It’s time for the DC Council to act, to demand that violent crimes be prosecuted and to provide MPD with more assets and personnel,” tweeted Denise Krepp, an ANC commissioner, over the weekend.

In an interview with WTOP on Monday, she wasn’t any less critical.

“Neighbors are angry,” she continued. “They’re very angry because what they’ve been seeing is a D.C. Council that’s been writing laws that let violent criminals get out of jail early.”

With three killings in that area this month, not to mention a much longer list of killings in places like Congress Heights in Southeast and Brightwood in upper Northwest, Krepp isn’t the only one who is speaking out.

Remember #CapitolHill and #HillEast residents, @MayorBowser wanted $11 million for 170 more @DCPoliceDept officers earlier this summer. @charlesallen said no and instead used the money for even more violence interrupters. #WatkinsShooting https://t.co/bk8rXPAg8O

Looking forward to our community meeting on Tuesday. I hope @CMCharlesAllen is ready to answer for themselves

Yet sharing Krepp’s frustration, though not in full agreement with the root causes she blames, is Council member Allen, himself.

“It’s incredibly frustrating as we see just this easy access to guns, we see conflict escalating so quickly,” said Allen. “It’s disturbing, it’s frustrating, it’s upsetting for myself as well as for neighbors across the city.”

But while his critics, including the D.C. Police Union, paint him as soft on crime, Allen said the facts tell a completely different story.

Allen also takes credit for helping to expand the D.C. Police Cadet program, which he said produces “a pipeline” of new cops from recruits from the city.

But he also disputed the notion that more police will solve the city’s ills, noting that when you factor in other agencies, such as the U.S. Park Police, the U.S. Capitol Police, and an alphabet soup of other agencies, D.C. becomes the city with the most police per capita anywhere.

“That can’t be the sole measure of what we’re doing,” said Allen. “We’ve lost track of how many shootings have taken place in front of the police.”

Instead, he’s preaching for a more holistic approach, something he calls a “both and” approach.

“In a crisis, I think that sometimes some people retreat into corners and try to pretend things are either this or they have to be that,” Allen said. In addition, he noted that felony prosecutions in the District are all handled at the federal level, and that judges can’t be overlooked for having the final say on how long someone might stay behind bars, whether they’re awaiting trial or serving a sentence.

But as crime continues to go up, not everyone thinks the urgency Allen is calling for is actually present, citing his support of a bill that provided for the early release of anyone who committed a crime before the age of 25, but had also served at least 15 years behind bars. It applies to all felonies, including rape and murder.

“He’s sending a signal to criminals that the D.C. Council believes they shouldn’t go to jail,” said Krepp. “What I see is him digging in his heels while we have murders and homicides and armed carjackings and shootings — and that’s a problem.”

And she said people in her Hill East neighborhood no longer feel safe.

“People are very conscious about what they’re carrying on themselves,” Krepp said, saying women are no longer carrying their purses, leaving credit cards at home.

For his part, Allen seemed to agree with the circumstances of where the city is right now, saying “the city has to treat this with much more urgency. This is an emergency.”

A public meeting is set for the Capitol Hill neighborhood on Tuesday night to discuss what to do about the spike in crime there.

Allen will be there, as will representatives from DC’s public safety agencies. The head of the D.C. Police Union was also invited, and confirmed, but later had that invitation rescinded by other members of the ANC, something Krepp said leaves her “pissed off” even today. 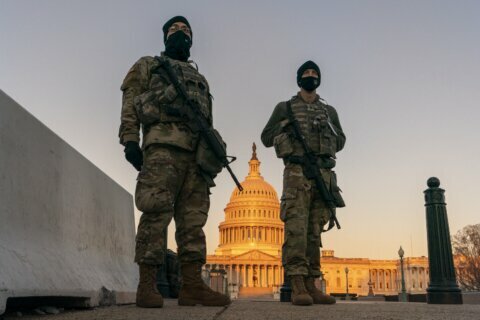