Animal control officers had to rescue a dog stuck in the mud at a D.C. park. Now, they are reminding owners to keep their dogs on leashes.
Listen now to WTOP News WTOP.com | Alexa | Google Home | WTOP App | 103.5 FM
(1/4) 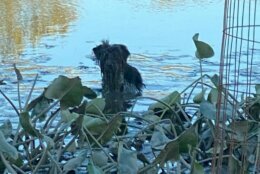 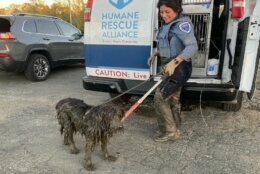 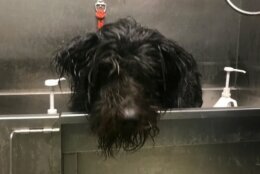 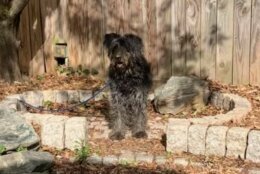 Animal control officers had to rescue a dog stuck in the mud at a D.C. park. Now, they are reminding owners to keep their dogs on leashes.

Humane Rescue Alliance officers responded to a call for a dog running around Kingman and Heritage islands.

When they arrived, they heard something.

He said that he ran towards the sound, and what he saw was concerning. Stuck in the mud was an elderly, shaggy dog.

“So we were able to just finally sight her, we were able to go on out, I was able to get a catchpole on her and remove her from the mud and then just kind of get out of that area,” he said.

Jesien said he could see how she “could be confused as a stump.”

They were able to wade into the waist-deep mud and pull out a dog named Cutie Pie.

He said she wouldn’t have survived much longer.

“This was really something that we needed to get to in an urgent manner. And I’m very grateful that we were able to,” Jesien said. “I can tell you that I got stuck in there several times. That mud was about waist deep and it was quite cold.”

Jesien said that they have been in contact with the dog owner and they are going through the reclaim process after an investigation into how the dog got there.

The Humane Rescue Alliance is partnering with Friends of Kingman and Heritage Islands, the Department of Energy & Environment and Living Classrooms of the National Capital Region on the recent launch of the Bark Rangers program.

It encourages people to take the “Paw Pledge” to keep their dogs on leashes at Kingman and Heritage islands.

And when they’re not?

“This is a liability that you’re presenting your dog to, you’re exposing him to conditions that he may not fare very well with. When your dog is leashed and under your control, I can say that that’s the safest environment,” Jesien said.