Norton meets with DC kids on impact of Capitol fencing

The fencing that was erected around the U.S. Capitol after January's deadly riot is having a real, negative impact on D.C. kids, the District's delegate to Congress said Friday.
Listen now to WTOP News WTOP.com | Alexa | Google Home | WTOP App | 103.5 FM

The fencing that was erected around the U.S. Capitol after January’s deadly riot is having a real, negative impact on D.C. kids, the District’s delegate to Congress said Friday.

Del. Eleanor Holmes Norton met with D.C. Public School third graders from Brent Elementary School, which is near the Capitol.

“I enjoyed my time with these astute future leaders,” Norton said in a release. “The fencing around the complex has seriously impacted the surrounding neighborhoods, especially the children who live here, as the Brent third graders showed. These budding advocates did an excellent job in meeting with me and in writing and sharing their experiences. They practiced and used their persuasive writing to push for the fences to come down in their neighborhood.”

Norton added that in addition to many kids being stuck at home during the pandemic, “the children near the Capitol have also seen the closure of their outdoor spaces, where they used to run, walk and play before the attack on Jan. 6, 2021.”

The students wrote a plethora of letters to Norton, with several saying the fence made the Capitol look like a prison.

“It looks like a prison from the outside. And the barrier is taking away our nation’s Capitol from its people!” one student wrote.

“It is not fair to the people that live near the Capital (sic), because it looks like they are in a BIG prison,” wrote another.

“One time my family walk down to the fences and it felt like there was a prison in front of our house. It was not something to joke about. My body was so scared I wanted to run away,” another wrote. 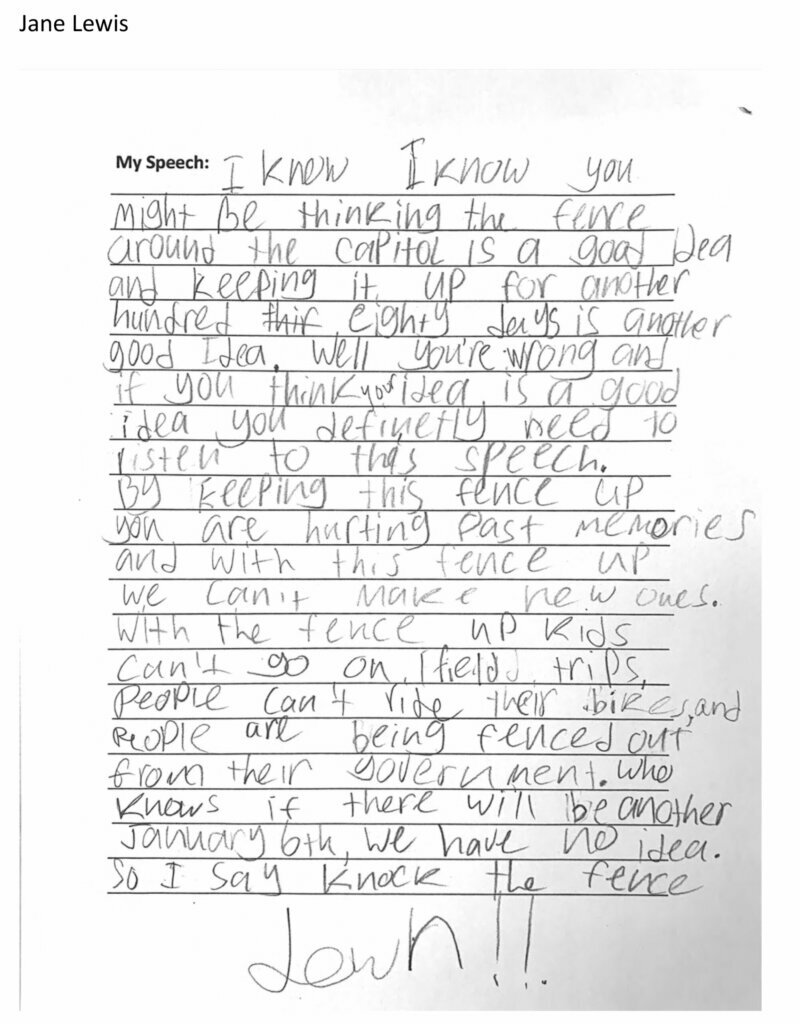 A compilation of the students’ writings is available online.

On Thursday, U.S. Capitol Police said they would be “modifying parts of the outer fencing in order to open portions of Louisiana Ave., NW and Washington Ave., SW by the end of the weekend.”

Norton proposed a ban on permanent fencing around the Capitol in February.