A man suspected of robbing a Chick-fil-A in Northeast D.C. Thursday, who suffered life-threatening injuries after being shot by a security guard, faces multiple charges, including armed robbery and assault with a dangerous weapon.

The suspect’s firearm was recovered at the scene, according to police.

Robinson entered the restaurant, brandished a handgun and demanded money, according to a news release. An employee opened the cash register and Robinson took money from it before trying to flee.

“A uniformed Special Police Officer, employed by the establishment, encountered the armed suspect and discharged their firearm, striking the suspect,” the police release stated.

D.C. Fire and Emergency Medical Services responded to the scene and took Robinson to a hospital for “treatment of life threatening injuries,” police said.

Details about Robinson’s condition were not provided by authorities.

A Chick-fil-A spokesperson said in a statement no team members were injured.

In addition to charges stemming from Thursday’s incident, D.C. police said that pursuant to a D.C. Superior Court arrest warrant, Robinson was charged with assault with a dangerous weapon for a shooting that happened on Aug. 21, 2020, in the 3000 block of Martin Luther King Jr. Avenue SE. 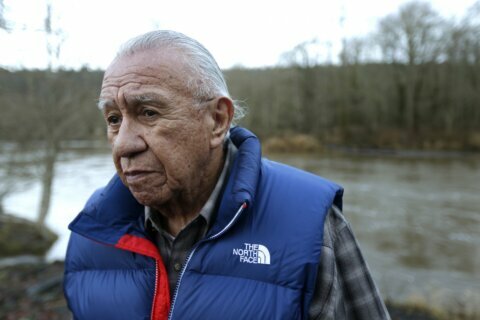