Bikeshare, new bike lanes make DC one of the best cycling cities in US

D.C. is one of the best cities to ride a bike in, according to this year's ratings from a cycling advocacy organization.
Listen now to WTOP News WTOP.com | Alexa | Google Home | WTOP App | 103.5 FM

Thanks to an expansion of the number of protected bike lanes, adding access to Capital Bikeshare and new efforts to promote bike safety for elementary school students, D.C. is one of the best places to ride a bike in North America, according to a survey by a cycling advocacy group.

PeopleForBikes released its third annual PlacesForBikes city ratings on June 9, with the District being named the fourth most bikeable city in the U.S. and fifth among all the cities ranked by the survey.

The top five cities were:

Only Denver, Colorado and Portland, Oregon ranked as high as the District among large American cities.

PeopleForBikes allowed cities to self-report their data for one segment of the analysis, which included a questionnaire asking for things like miles of different types of bike lanes, bike share access and parking for bikes, safe crossings for bikes, the number of injuries related to cycling and how often their cities host events like Bike to Work days and open streets events.

The ratings are designed to show a snapshot of a city’s ridership, safety, cycling network, acceleration (or expansion) of that network and its reach, or how well the cycling programs serve the overall community.

Rebecca Davies is PeopleForBikes’ network and mapping specialist. She said the cities that ranked highest are those with “strong historical investments in active transportation as well as cities pursuing ambitious plans to rapidly implement high-quality bicycle networks.”

About 550 cities in the U.S. and Canada were involved in the survey.

Jeff Marootian, director of the District’s Department of Transportation, said D.C. “has made incredible strides,” in expanding its infrastructure for safe cycling under the administration of Mayor Muriel Bowser.

The District’s plan for the future includes another 20 miles of protected bike lanes by 2022, according to a news release prompted by the city’s inclusion in the PeopleForBikes ranking.

Upcoming projects in D.C. include the following: 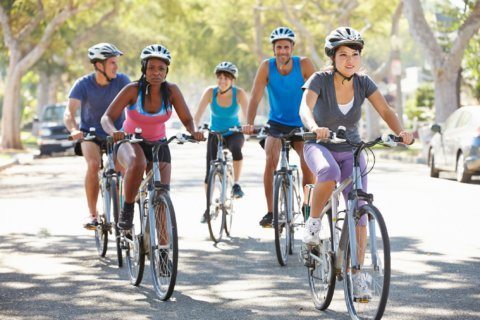