A plaque will be placed in Washington National Cathedral on Tuesday to mark the final resting place of Matthew Shepard, a gay college student whose murder in 1998 led to national attention on anti-LGBT hate crimes.
(1/5) 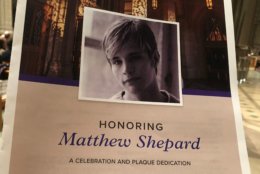 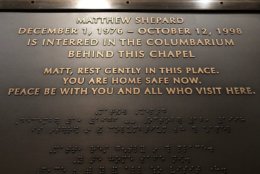 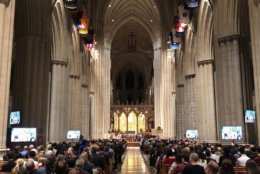 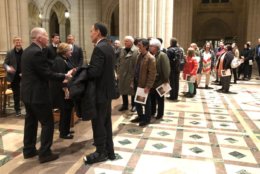 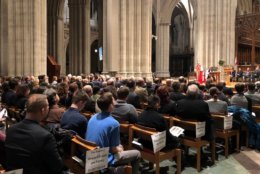 A plaque will be placed in Washington National Cathedral on Tuesday to mark the final resting place of Matthew Shepard, a gay college student whose murder in 1998 led to national attention on anti-LGBT hate crimes.

The new bronze plaque is modeled on another at the cathedral pointing visitors to remains of Helen Keller. A GoFundMe campaign launched to pay for it was a quick success.

“Matt, rest gently in this place, you are home safe now,” it reads. “Peace be with you and all who visit here.”

Shepard, a student at the University of Wyoming, was beaten and tied to a fence near Laramie, Wyoming on Oct. 6, 1998. He died days later in a hospital in Colorado.

His ashes were interred in the cathedral crypt two decades later in 2018. Shepard’s parents had been concerned if they buried their son elsewhere, his grave might be vandalized.

She announced it was time for the family to move forward.

“We need to do this for Matt. This is what he would want. We need to stop reflecting on what happened to Matt. We don’t need to stop trying to stop it from happening again,” Shepard said.

The family established the Matthew Shepard Foundation to support LGBT youth, fight for their safety and acceptance, and against hate.

“Let’s take Matt’s story forward into the world and make things better and safer for everyone,” Shepard said.

“In the upcoming years this will be about Matt, yes, but it’ll be about all of the civil rights and all the progress we’ve made for all the marginalized communities.”

The emotional ceremony left many in the crowd in tears, but Shepard’s father Dennis drew laughs.

“I know he’s with us, because I wore one of his ties. It’s the one with the Christmas cows on it, because he loved fun ties,” Dennis Shepard said.

“He loved fun things, and he would thoroughly enjoy being part of this, if he was with us today in person.”

The plaque will be placed near Keller’s in St. Joseph’s Chapel, and although the cathedral charges admission for tours, it is free to visit the crypt to see Shepard’s plaque.