The D.C. man indicted in the fatal stabbing of a woman as she went for an evening run in her Logan Circle neighborhood last September has pleaded guilty to first-degree murder.
Listen now to WTOP News WTOP.com | Alexa | Google Home | WTOP App | 103.5 FM

The D.C. man indicted in the fatal stabbing of a woman who’d been out on an evening run in her Logan Circle neighborhood last September has pleaded guilty to first-degree murder.

Anthony Crawford, 23, entered his plea in D.C. Superior Court Friday morning. The plea agreement calls for a 30-year sentence, but the judge will determine Crawford’s sentence at another hearing set for Sept. 13.

Police said Crawford attacked Wendy Martinez shortly before 8 p.m. on Sept. 18, and stabbed her a total of seven times in the neck, head and back. The 35-year-old avid runner stumbled into a nearby carryout and collapsed before she died. Police have described it as a random attack.

Martinez, a Georgetown University graduate who worked as an executive at a D.C. tech firm, was engaged to be married just a week before her killing.

Her fiance, Daniel Hincapie, and other friends inside the courtroom for the hearing Friday morning had tears in their eyes as the plea was announced.

As part of the plea hearing, Assistant U.S. Attorney Katie Earnest laid out some of the details of the attack, saying how Crawford shoplifted a kitchen knife from a nearby grocery store less than a half-hour before stabbing Martinez near the corner of 11th and P streets in Northwest D.C.

“Is that what happened, Mr. Crawford?” D.C. Superior Court Judge Craig Iscoe asked from the bench. “Did you take the knife from Giant? Did you stab her several times?”

“Was it a mistake? Was it self-defense?” the judge asked.

Crawford threw the knife to the ground and fled the area after the stabbing, prosecutors said, adding that he discarded bloody clothing as well.

Outside D.C. Superior Court, family members of the slain runner gathered. They told reporters they hadn’t learned of Crawford’s plea agreement until shortly before the hearing Friday morning.

Hincapie said the guilty plea marked the end of a “very sad and dark episode” in the family’s lives.

He said he was feeling “a mixture of sadness because nothing is going to bring Wendy back. And, at the same time, there’s a sense of relief and peace that at least the person who committed this crime is going to be out of the streets for many, many years.”

He added: “It’s a very painful moment, because you’re hearing confirmation from the person who committed the crime that he actually committed the crime. … At least he is accepting his responsibility, and he’s going to have a lot of time to actually think about what he did.”

After the plea, Crawford’s public defender requested he be held in St. Elizabeth’s Hospital until his sentencing, saying he needed mental health assistance. But the judge denied the request.

“Mr. Crawford was quite focused,” Iscoe said. “He answered every question with complete comprehension. He is clearly competent.”

In addition, before accepting Crawford’s guilty plea, Iscoe explained the nuances of an insanity plea, and Crawford nodded appropriately.

In Crawford’s last court appearance before his guilty plea, his defense team indicated they were mulling a plea of “not guilty by reason insanity,” pointing to witnesses who saw Crawford acting erratically before the stabbing.

In February, Crawford was found not competent to stand trial, and court proceedings were temporarily put on hold as he underwent a full mental evaluation. That came after Crawford was observed mumbling to himself and swaying in his seat during previous preliminary hearings.

The court-appointed psychologist reported that Crawford is psychotic but had benefited from taking medications. The psychologist’s report said Crawford sometimes “talks to himself,” but he “possesses the ability to make reasoned choices regarding his plea options and is able to consult with defense counsel in a rational manner.”

Following that evaluation, Iscoe ruled in March that Crawford was competent to stand trial.

Late last year, Martinez’s former employer, FiscalNote, and the Greater Washington Community Foundation announced the creation of the Wendy Martinez Legacy Project to help advance the cause of women in the technology sector and to work at making D.C. safer for runners, especially women.

In April, Hincapie ran the Boston Marathon in Martinez’s honor, raising $13,000 for the organization “Girls on the Run.” 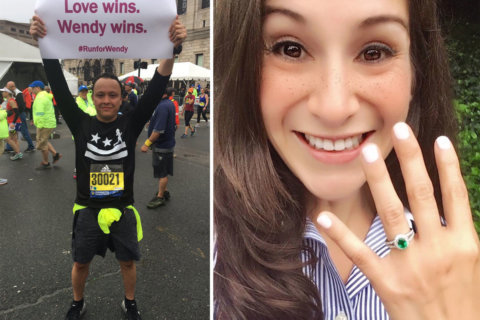