At the National World War II Memorial in D.C., volunteers marked the 75th anniversary of the largest ever military operation by sea — D-Day — by saying the names of the service members who took part in the invasion.

Volunteers took turns on Wednesday reading the names of some 9,000 service members buried at Normandy American Cemetery in France.

They started in the afternoon and continued long into the dark of night. Members of the public were invited to take part.

Greg Clawson, from Roseville, California, was visiting the D.C. area with his family. When they arrived at the memorial and saw what was going on, Clawson chose to add his voice.

“I couldn’t pass that up. That’s just an honor. Even though I haven’t been in the armed services, to participate in any way is a very sacred honor,” Clawson said.

Kim Cole, from Ashburn, Virginia, heard about the event in advance and decided to volunteer.

“I just thought it’s really going to be heartbreaking. But I just have to do this because I’m sure it’s been decades since some of these names have been spoken if their parents are gone, they had no siblings or they didn’t have any children since many of them were between 18 and 25,” Cole said. 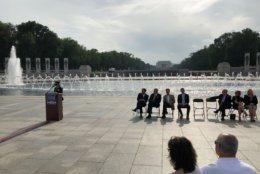 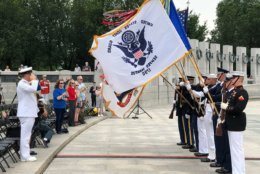 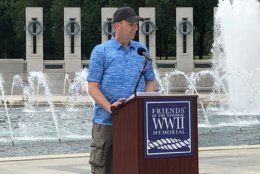 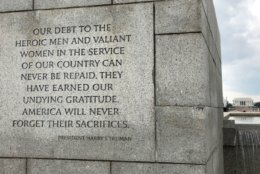 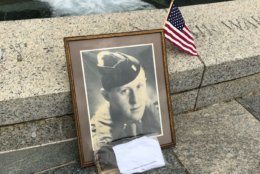 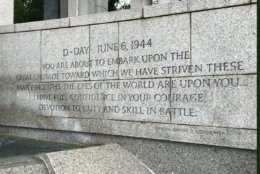 There was a remembrance ceremony to honor the dead, as well.

“God bless them on this solemn day, and let all of us who are privileged to be here and participate in this commemoration remember our own obligation to see that succeeding generations of Americans not be allowed never to know of that sacrifice and their indebtedness to these brave men and women,” said Josiah Bunting, chairman of the Friends of the National World War II Memorial.

U.S. Sen. Tim Kaine, D-Virginia, took part in the ceremony. He talked about why the National D-Day Memorial was built in the small town of Bedford, Virginia, northeast of Roanoke.

“There were 32 young men from Bedford who came ashore on that first day. Nineteen were killed almost immediately, and another three died within the first few days after the D-Day invasion. No town in the United States was as affected on a per capita basis as the town of Bedford,” Kaine said.

This little boy doing his part, helping read the names of those who sacrificed their lives for freedom 75 years ago @WTOP @WWIIMemorial #DDay75 pic.twitter.com/HTbotFRwmN

Barbara George talked about how painful and surreal it was to lose her father, Capt. Malcolm L. George, during the war. He landed with the invasion force on June 6, 1944, and he died a day later.

“It was odd for me and my brothers to grow up in the 40s and early 50s hearing that our father was dead, and yet no one talked about it,” George said. “When I was 14, my mother moved to another town and I was mystified. In my heart I was thinking, ‘How will my father find us when we move?’ even though I knew that was illogical. It just was there. It didn’t become real for me until I was 63 and went to Normandy American Cemetery and I saw his grave and I went, ‘Oh, it’s real. It’s true.'”