The weekend brought another round of demonstrations to the Venezuelan Embassy building in Georgetown. See photos as opposing sides demonstrated outside the embassy.
Listen now to WTOP News WTOP.com | Alexa | Google Home | WTOP App | 103.5 FM 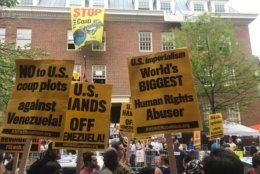 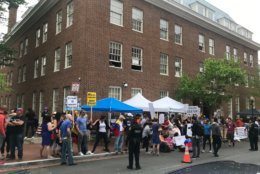 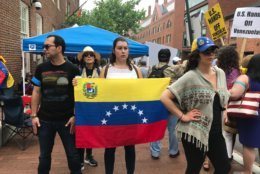 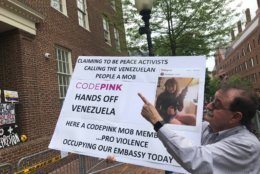 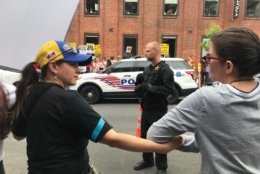 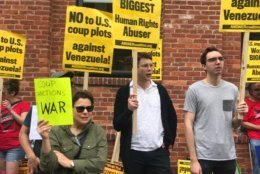 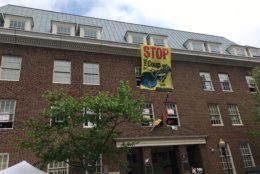 “We are the guests of the Venezuelan government. We have been invited inside and are lawfully living in the embassy,” said Ariel Gold, national co-director of Code Pink. “We as Americans have a responsibility to stop our government from violating international law and orchestrating a coup and we will continue to do so,” she said.

The activists who support Venezuelan President Nicolas Maduro unfurled a large, yellow banner from the upper floor of the building reading, “Stop the Coup.”

Anti-Maduro demonstrators, including Venezuelan and Venezuelan-Americans, demanded an end to the building’s occupation, although they acknowledge it is at the behest of Maduro.

“We have Americans living inside the embassy while real Venezuelans are out here protesting,” said Isabela Mourino, a Venezuelan student who lives in D.C. “It’s ironic and outrageous that Americans are occupying the building,” she said.

The demonstrations have been noisy but peaceful, with each side trying to drown out each other by banging pots, blowing whistles, shouting chants and blaring sirens through battery-powered megaphones.

“We want the embassy to be returned to the people of Venezuela. I want fair and free elections for my county, and I want the people of my country to stop suffering,” said Dilianna Bustillos, a Venezuelan-American from Merrifield, Virgnia.

D.C. police Special Operations Division deployed officers around the four-story brick building on the banks of the C&O Canal. Police carefully monitored protesters on the grounds of the building and on 30th Street NW, in front of the building. 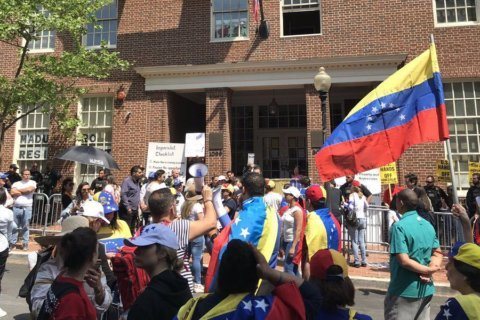 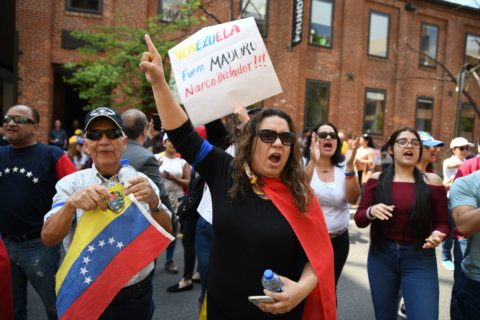