WASHINGTON — For the past 10 years, people have gathered to run through D.C.’s cold streets in their underthings as part of an annual effort to raise funds for research to find a cure for neurofibromatosis — a rare genetic disease that causes tumors to grow throughout the nervous system.

This year, people taking part in Cupid’s Undie Run gathered at Penn Social, donning a variety of costumes — all with underwear as the underlying theme.

From Daenerys Targaryen from “Game of Thrones” to the Duffman from the “Simpsons,” all braved 30-degree temperatures and a one-mile(ish) run for the cause.

Brendan Hanrahan, who is one of the event’s founders, was dressed as a United States Founding Father — complete with the wig, but without breeches.

It all got started “with an email I sent to my friends while I was in grad school about trying to put together a fundraiser for the Children’s Tumor Foundation, and the upcoming holiday was Valentine’s Day, so that’s how Cupid came in,” Hanrahan said.

Ashley Casper, one of the run’s volunteer directors, first heard about the run a few years ago. “I saw it as something fun to do. Once I signed up and ran, I met volunteers and learned about NF,” she said.

After her first race in 2015, she started asking what she could do to help, which led to her role as race director for both last year’s and this year’s runs.

The wind added an extra frigid bite to the air, but walkers and runners weren’t deterred from their course. The starting line was a frenetic buzz with enthusiastic runners and walkers moving, jumping from side to side in an attempt to keep warm before taking off down E Street and making a few turns toward the National Mall, before reversing course back to Penn Station.

That buzz has spread, as Cupid’s Undie Run events are scheduled across the United States and have hopped an ocean, too.

“We’re in 38 cities across the country,” Hanrahan said. “They’re also in several cities in Australia, so we’ve been growing and growing and gaining momentum.” 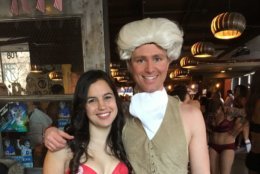 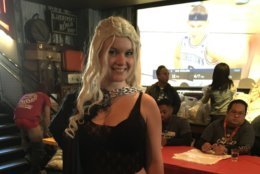 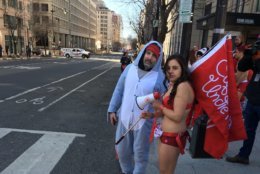