Home » Washington, DC News » ‘I will know that…

‘I will know that I was here’: Residents line the streets to pay tribute to George HW Bush

As the procession carrying George H.W. Bush’s casket approached the Washington National Cathedral, thousands of people lined the streets of D.C. to pay tribute to the former president with nothing but their presence.
Listen now to WTOP News WTOP.com | Alexa | Google Home | WTOP App | 103.5 FM

WASHINGTON — It was a moment like no other here in D.C., as the state funeral for the nation’s 41st president unfolded with military precision at the National Cathedral.

And outside the cathedral, people lined Wisconsin Avenue to get a glimpse of history and the motorcade carrying the late president.

As the procession carrying George H.W. Bush’s casket approached the Washington National Cathedral, thousands of people lined the streets of D.C. to pay tribute to the former president with nothing but their presence.

It wasn’t strictly a partisan affair: Standing on a brick wall in front of an apartment building across the street from the cathedral, Charles Hitchcock of D.C.’s Glover Park neighborhood described himself as “not a huge fan of George H.W. Bush’s politics” but called him “a class act” and “a very decent human being.”

It was cold out, but Hitchcock said, “As long as I’ve got some hot coffee, I’m good.”

Barbara Morehouse, of Great Falls, described herself as “a fan.” She cited his role in the passing of the Americans with Disabilities Act — “so very important to me” — as well as his “love of family and country.”

Morehouse said she moved to D.C. just before Bush’s inauguration as president in 1989. She saw the parade and deemed it “the most amazing thing, to be able to be there and see such a historical event in person.”

She knew “standing here will in no way impact what is going on, but I will know that I was here to pay last respects to someone I thought was really wonderful.”

Paul Noe said Bush was “a great role model for our country,” adding he was “one could argue, the most-accomplished man to ever sit in the office of the president.” Beginning with Bush’s enlistment in World War II, becoming the youngest Navy flier, Noe said, “His service for his entire life to his country is an inspiration to everyone.” He added that Bush was rightly cited as a member of “the greatest generation.”

As the Bush family watched nearby, the flag-draped casket was carried up the steps and into the cathedral.

Former President George W. Bush and his siblings then solemnly made their way inside.

Washington has now said its final goodbye to George Herbert Walker Bush, who will be flown to Texas and his final resting place.

WTOP’s Mitchell Miller and John Aaron contributed to this report. 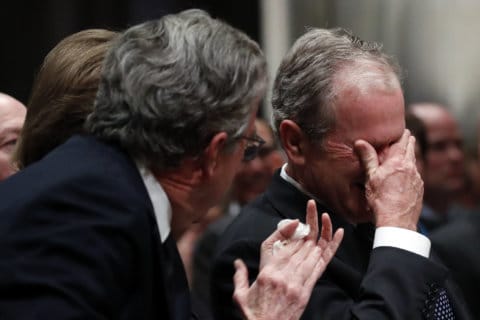