The lights on the National Christmas Tree flickered on and off Sunday as the National Park Service assessed damage to the tree. The hope is that the lights will be on Christmas Eve or Christmas Day.
Listen now to WTOP News WTOP.com | Alexa | Google Home | WTOP App | 103.5 FM
(1/2) 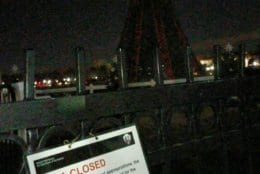 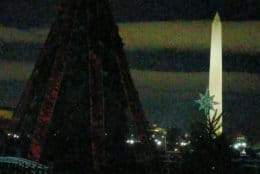 WASHINGTON — The lights on the National Christmas Tree flickered on and off Sunday as the National Park Service assessed damage to the tree.

The hope is that the lights will be on Christmas Eve or Christmas Day.

The National Park Foundation is providing materials and labor for the restoration, Anzelmo-Sarles said.

Anzelmo-Sarles said that the government shutdown made it more difficult to repair the damaged sections.

The man, who has not been identified, climbed the tree near the White House at 5:45 p.m. Friday. He remained in the tree until two negotiators convinced him to come down at about 7 p.m, said U.S. Park Police Sgt. Eduardo Delgado.

The National Park Service said the man made it between 15 feet and 20 feet up the tree before climbing down on his own accord. No one was injured, but the man was taken to the hospital for evaluation.

The holiday performance scheduled for Saturday in President’s Park was canceled because of the lighting issue, NPS said.

The @TheNationalTree on the Ellipse in @PresParkNPS is closed & lights are off until further notice. pic.twitter.com/TqpcLChDyN

The National Christmas Tree is a Colorado blue spruce that was grown in Virginia before it was uprooted and moved to the Ellipse in 2012. It was a replacement for a tree that was planted in 1978 and was felled during a February 2011 windstorm.