The D.C. Council Judiciary and Public Safety Committee has voted unanimously to join Maryland and a dozen other states with "red flag" laws — laws intended to temporarily remove guns from the hands of individuals who may be in crisis.
Listen now to WTOP News WTOP.com | Alexa | Google Home | WTOP App | 103.5 FM

WASHINGTON — The D.C. Council Judiciary and Public Safety Committee has voted unanimously to join Maryland and a dozen other states with “red flag” laws — laws intended to temporarily remove guns from the hands of individuals who may be in crisis.

The measure would allow a household member or a law enforcement officer to petition the court to remove a firearm from a person’s possession if the court finds significant risk that the person might harm someone, including themselves.

“This is designed to help keep people safe, save lives, both their own, as well as if they’re looking to do violence to others. We’ve seen warning signs. We want to be able to equip MPD and the courts to have the tools necessary to remove those firearms before that trigger gets pulled,” said D.C. Council member Charles Allen, of Ward 6, chairman of the committee.

The bill, sent to the full council for consideration, also includes a ban on bump stocks and stiffens penalties for high-capacity magazine clips. Allen said strong measures are needed to curb devices that are designed to “put a lot of bullets in the air.”

“Think about Makiyah Wilson, the 10-year-old little girl who was killed this summer. Seventy-six shell cases were found from that scene. Forty-five of those casings came from a firearm that was equipped with an ammunition drum that could hold 100 rounds of ammunition,” said Allen, principal sponsor of the gun control bill.

The bill would raise from one year to three years the jail-time penalty for anyone possessing a magazine that holds more than 10 rounds.

D.C. Mayor Muriel Bowser first introduced legislation nine months ago to ban the possession and sale of bump stocks in the city.

“What we do is we match up our language with Maryland so that we have a shared prohibition across our jurisdictions,” Allen said.

The bill also creates a judicial review process for individuals who want to register a firearm and have been voluntarily or involuntarily committed for mental health in the last five years.

The D.C. Council is expected to take up the gun bill on Dec. 4. If the bill is eventually signed into law by the mayor and it passes congressional review, Allen expects the new measures could take effect early next year. 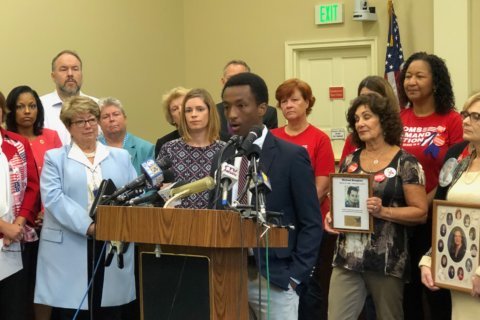