In the U.S. Botanic Garden's train holiday display, called "Season's Greenings: All Aboard," some of the structures are made of plants. The display runs through Jan. 1. See photos and video.
Listen now to WTOP News WTOP.com | Alexa | Google Home | WTOP App | 103.5 FM

WASHINGTON — Every year, mushrooms, acorns, cacao pods and other plant materials are transformed into a dazzling display at the U.S. Botanic Garden on Capitol Hill.

This year, visitors will journey on a virtual train trip across America. In the Botanic Garden’s West Wing, visitors get a glimpse of the nation’s rail history in “Season’s Greenings: All Aboard!”

Lee Coykendall, the U.S. Botanic Garden’s senior education specialist, explained how the displays include miniature versions of train stations from across the country, including Detroit’s Michigan Central Station, the Kirwood Missouri Pacific Station and more.

And, the truly extraordinary thing about the installation: The displays are made of plant materials. 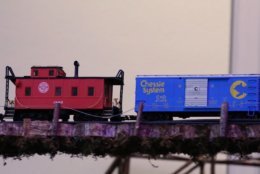 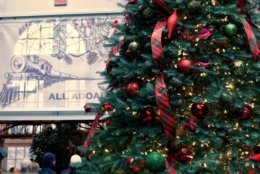 “So, you might see things such as acorns, or pine cone scales, or beautiful different kinds of bark that are making the texture and the buildings just come alive,” Coykendall said.

As visitors wind through the exhibit that features model trains making a circuit of the display at ground level and on replica rail bridges overhead, they can also step into the “caboose” — a recreation of a rail car that includes tiny scenes that show how the development of agriculture and railroads are linked.

In describing the details in one scene, Coykendall said, “We’ve got one here, these are the grain fields of Kansas, and you’ll see if you look at the little red tractor — if you look at the wheels — they’re made of little seed pods.”

Heather Kraw from Vienna, Virginia, said her family comes every year on Thanksgiving Day. Their assessment of this year’s display?

“We loved it. Some of my kids have been to some of these stations,” she said, pointing out the replica of the Grand Canyon Lodge. “They’ve been really excited to see places they’ve been to recreated in miniature.”

Kraw’s 7-year-old son, Jefferson, pointed to one train as his favorite; his twin brother, Truman, marveled at how lifelike the replicas were.

“There’s so much to it! I mean, look, they literally made that all out of their skill!” Truman said.

Their older sister, 11-year-old Gywneth, was also impressed. Her favorite part of the exhibit was the Dino Depot, a fantasy rendering of a train station featuring, you guessed it, dinosaur structures.

Outside the garden, a line was still forming for the exhibit late in the afternoon.

Flor Lopez and her family, visiting from Houston, Texas, originally came to see the holiday decorations that are a part of the U.S. Botanic Garden’s annual display. But, the family was excited to learn that there was an exhibit featuring model trains.

Her husband, Omar, said, “We were not aware of the trains, so this is a plus. This is a bonus!”

Their 13-year-old son, Joshua, was most excited by his trip on a real rail system, Metrorail. He also enjoyed his first taxi ride. He said that “in Houston, there’s not that much public transportation,” but in D.C., he enjoyed the chance to explore using public transit.

Coykendall said one of the appeals of the holiday display at the U.S. Botanic Garden is the fact that all ages enjoy it.

“It speaks to all ages,” Coykendall said. “You come in and you have your own memories, and you’re also creating memories for your younger ones,”

The holiday display opened Thanksgiving Day and runs through Jan. 1.