In anticipation of Sunday's expected gathering of white nationalists in D.C., area leaders are trying to give counterprotesters advice about how best to respond to bigoted groups.
Listen now to WTOP News WTOP.com | Alexa | Google Home | WTOP App | 103.5 FM

WASHINGTON — In anticipation of Sunday’s expected gathering of white nationalists in D.C., area leaders are trying to give counterprotesters advice about how best to respond to bigoted groups.

Norton was among local leaders and community members who gathered Friday at Washington Hebrew Congregation to explore different responses to the “Unite the Right 2” rally.

“We’ve encouraged our members … not to attend anything downtown on Sunday, the day of the demonstration,” said Steven Jacober, executive director of Washington Hebrew Congregation. “We don’t want to put anyone in harm’s way.”

But for those who are planning to attend events in D.C. on Sunday, the Anti-Defamation League and Jewish Community Relations Council recommended putting as much distance as possible between protesters and counterprotesters.

“Safety should be the number one priority,” the groups advised.

People are being encouraged not to provoke or confront members of the “Unite the Right 2” event.

“But to create an alternative message of diversity, of love, of inclusion, of resilience, of hope — and I really believe that we can do that together,” said Aaron Alexander, co-senior rabbi at Adas Israel Congregation.

Alexander said it’s understandable that some people might feel anxiety and frustration with the messages of hate that are being brought to the city. So, what does someone do when their visceral response might be to stand toe-to-toe with an adversary, get in their face and yell at them?

“Quickly think: Where will this energy become productive and not provocative?” Alexander said. “Take a deep breath. And, know that you will get what you need from being with people who share a similar value of love, not from yelling at people who really want you to yell at them.”

Alexander noted that there will be a number of counterprotests planned in D.C. for Sunday, where people can embrace and display feelings of inclusion and tolerance.

“That will be with people who don’t look like you, who may not live exactly the same lives as you, but who share a similar value,” Alexander said, adding that a number of faith groups will be on the National Mall on Sunday for a United to Love event.

The National Park Service has issued permits for a number of events Sunday: the DC United Against Hate rally takes place on Freedom Plaza, and Black Lives Matter of Greater New York will be at the Martin Luther King Jr. Memorial. The ANSWER Coalition and Partnership for Civil Justice will be gathering in the areas of Lafayette Square, Farragut Square and McPherson Square.

Gene Stilp intends to burn a double-sided Nazi/Confederate flag on the northwest sidewalk of Lafayette Square. Republican congressional candidate Thomas Oh of Alexandria, Virginia, is holding a rally at the Lincoln Memorial with the goal of showing that the “alt-right is not welcomed by Republicans.” 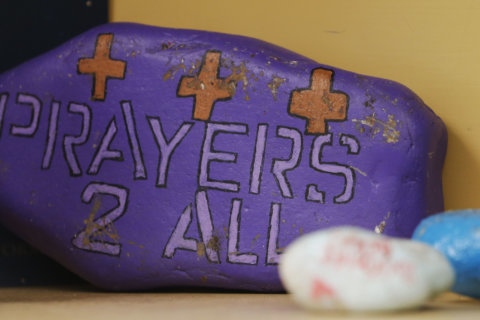