Most of the accolades pouring in for former first lady Barbara Bush, who died Tuesday at 92, center on her role as the matriarch of a powerful American political family. But a few people in the D.C. area are pointing to an act of grandmotherly humanity as her defining moment.
Listen now to WTOP News WTOP.com | Alexa | Google Home | WTOP App | 103.5 FM
(1/2) 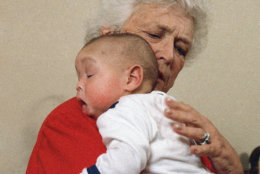 WASHINGTON — Most of the accolades pouring in for former first lady Barbara Bush, who died Tuesday at 92, center on her role as the matriarch of a powerful American political family. But a few people in the D.C. area are pointing to an act of grandmotherly humanity as her defining moment.

On March 22, 1989, while her husband, George H.W. Bush, was in the White House, and her son, future president George W. Bush, had just moved to Washington to assist in the family business, the first lady visited Grandma’s House, one of the first residences in the country created to care for AIDS-infected infants.

The images of Barbara Bush hugging babies, and perhaps more importantly an adult man with AIDS, sent a powerful message of compassion and understanding during a period of fearfulness about the disease. Her words and actions during the largely unscripted exchange dramatically changed the nation’s understanding and first impression of people infected with HIV.

That year “was the heights of the AIDS crisis,” said Mary Kate Cary, a speechwriter for President George H.W. Bush from 1989 to 1992. “It was before any kind of retroviral drug had been invented yet.”

Scientists were still trying to fully understand HIV and AIDS, but at the time many Americans thought of AIDS as a “gay disease.”

During her visit to the stately Victorian town house on Westminster Street Northwest, near Logan Circle, Bush cradled and kissed infants.

“You can hug and pick up AIDS babies and people who have the HIV virus” without being put at risk, Bush said. “There is a need for compassion.”

In 1989, Joan McCarley was the executive director of Grandma’s House. She told WTOP Bush’s visit is still being felt in the organization.

“At the time HIV had strong stigmas and stereotypes,” McCarley said. “She sat down with no stigma, no stereotype — just unconditional love.”

McCarley said Bush’s demonstration of acceptance was empowering to adults in the room, with the hope it would resonate to the public at large.

“She did it very boldly, compassionately, with no display of any fear or barrier,” McCarley said. “It changed the climate.”

Also in the room was Debbie Tate, president of Terrific Inc., a housing and human service organization which operates Grandma’s House.

“That opened up the door, and eventually Princess Diana did a benefit for Grandma’s House,” Tate said.

Photos from Bush’s visit still hang on the walls of the Westminster Street house, which is now being used for other Terrific Inc. activities.

Cary said President George H.W. and Barbara Bush lost a child at age 3 to leukemia, when the pair were in their 20s.

“I think she had a special antenna for sick children,” Cary said.

Bush’s grace when questioned by an adult AIDS patient during a private meeting at Grandma’s House brought her message of acceptance to a new level.

“One of the men said something along the lines of ‘It’s terrific you’re holding these babies with AIDS, but the country sees them as innocent, and the rest of us with AIDS as guilty. The whole community here could use a hug from you,’ he said, and I think he meant it metaphorically, but she immediately jumped up and hugged him.”

The man, named Lou Tesconi, told Bush he felt isolated from his parents, and longed to be hugged again, by his mother.

Cary read Bush’s words from her memoir: “A poor substitute, I hugged that darling young man and did it again in front of the cameras. But what he really needed was family.”

Choking up while reading, Cary said, “To me, that tells you everything you need to know about Barbara Bush.”

“The Hug That Says It All” pic.twitter.com/qgfmnlSxe6

“This was a time when HIV and AIDS were feared more than anything and those afflicted were often marginalized, if not scorned,” Charles Tesconi said. “Mrs. Bush’s visit was not only important to Lou and his cause, but it was bold on her part — and I think it’s fair to say her visit emboldened Lou and his mission.”

Longtime White House correspondent Paul Brandus, author of “Under This Roof: A History of the White House and the Presidency,” said Bush’s message was clear and strong: “I think this is one of the most powerful things a first lady can do — focus attention on a problem, and do so in a way that perhaps not even a president can do.”

“She helped change the conversation,” Brandus said. “She reduced ignorance, and made people think, and made them care.”

“It wasn’t a visit that was politically instigated, or orchestrated by the White House,” McCarley said. “She just came as a person.”

“That 1989 hospice visit was such a long-ago moment, but one that I think just encapsulates who the real Barbara Bush was,” said Brandus. “I think in this current era of selfishness and cynicism, the story seems all the more touching, today.”