A Tennessee woman who's tried to sneak onto White House grounds before was arrested Friday after allegedly trying to drive her van through a security barrier.
(1/3) 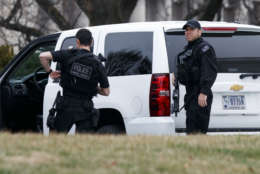 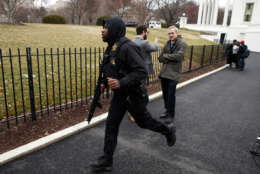 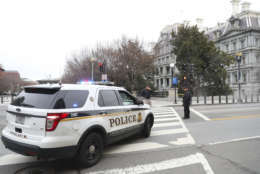 WASHINGTON — A Tennessee woman was in D.C. police custody Friday evening after authorities say she drove a van into a security barrier while armed with a pistol.

And according to the Secret Service, this isn’t the first time she’s tried to gain entry onto White House grounds.

Jessica Ford, 35, of La Vergne, Tenn., faces several charges, including assault with a dangerous weapon; unlawful possession of a firearm; assault on a police officer; and destroying government property.

The incident happened on 17th and E streets Northwest just before 3 p.m., according to D.C. police. Ford allegedly drove the van into the barrier, then tried to accelerate through it. Officers eventually wrestled the gun from Ford’s hand, police said, and then pulled Ford herself out from the van through the driver’s-side window.

No shots were fired.

The woman has encountered the Secret Service near the White House on multiple occasions, which has resulted in numerous arrests for a variety of criminal violations.

According to D.C. Superior Court records, for instance, a Jessica R. Ford was charged with unlawful entry on April 17. She was sentenced to a year’s probation; told to stay away from the White House complex; and ordered to undergo a mental health screening Sept. 7.