Snowy owls swap the Arctic for the National Mall

Snowy owls from the Arctic are taking up residence on the National Mall and sheltering outside the U.S. Department of Agriculture. Experts say the owls are being spotted far from their own habitat because of a spike in owl populations and the younger birds push out of their range to find new territory.
Listen now to WTOP News WTOP.com | Alexa | Google Home | WTOP App | 103.5 FM
(1/4) 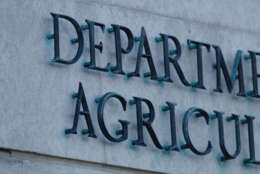 WASHINGTON — Anne Almond spotted the first snowy owl just outside her office window at the U.S. Department of Agriculture weeks ago. Almond, an agricultural marketing specialist, was captivated by the bird she decided to call “Olive.” The visitor from the Arctic was hunkered down on a ledge inside the courtyard of the building just off the National Mall.

“Somebody saw her one day on the ledge across from our office, so now we’ve just been engrossed in watching her when she comes,” Almond said.

“I’m an animal lover. I love all animals!”

She says it’s hard to pull herself away from viewing the owl.

“I have to make myself not watch her all day,” she said, laughing.

In 2014, D.C. was visited by a snowy owl whose appearance transfixed the region, but sadly, that bird which had been hit by a vehicle, treated at D.C. City Wildlife and then transferred to a raptor center in Minnesota for more rehabilitation, was eventually killed after being struck again after its release.

Almond wanted to make sure the snowy owl outside her window was OK, so she got in touch with Dan Rauch at the D.C. Department of Energy and the Environment. Rauch, a wildlife biologist, met with Almond at the USDA and said there are two snowy owls using the federal complex as a shelter. Rauch said the young snowy owls at the USDA seem to be pretty street-smart, hunkering down by day, and hunting by night.

Almond said she was relieved to hear that the birds are apparently healthy. She said Rauch was able to tell her they’ve been hunting.

Olive, it seems, has found a convenient — and favorite — food source.

“She’s been catching ducks down at Hains Point,” Almond said.

The other owl, also believed to be a juvenile female, has been spotted at Union Station and roosting on the top of the roof of the Mandarin Oriental Hotel, according to Rauch.

Snowy owls are spotted far from their own habitat as the result of an “irruption,” a phenomenon that’s still not well understood, Rauch said. It’s thought that the irruptions — when the birds travel far from their normal Arctic range — are the result of a population boom of their favorite food, lemmings. The abundant food generates a spike in owl populations and the younger birds push out of their range to find new territory.

Rauch said unlike bald eagles that return to a nesting spot for years, snowy owls are truly nomadic.

“They’re really a mystery,” he said. “Snowy owls might nest in one corner of Canada one year, and in the next year, there aren’t any there.”

There are hazards that the birds have to avoid. No. 1 is staying clear of traffic. Rauch explained that in their native habitat, the owls would be hunting over vast expanses of open land, and a highway or even broad avenue can seem like a perfectly reasonable spot to land.

The owls also have encroached on someone else’s territory. He said there are a pair of red-tailed hawks that have made the USDA their home, and they may try to push the owls out. But because the owls don’t hunt until the nighttime, they’ve so far avoided conflict.

Almond said she’s not alone in her enthusiasm over the appearance of the owls. Her colleagues will often pop in to ask if the owl is still on the ledge outside her window and if they can take a look. They’ve been snapping photos too.

Rauch said the observations by the USDA employees are a great citizen-science project and are producing valuable data.

“These guys are providing information that otherwise, we wouldn’t get,” he said.

Passersby can’t see the owls while they roost during the day. They stick to that interior courtyard of the USDA, but they have been spotted coming and going at dawn and dusk. Visitors to D.C., told of the presence of the birds, were eager to catch a glimpse.

Kevin Estevez and Crisitanne Fernandez, in town for a conference, said they’d be keeping an eye out for the birds while in town.

“I would be interested in seeing one,” said Fernandez.

“I think owls are pretty cool,” said Estevez. “I mean they can turn their heads 180 degrees or something like that, and when they fly you can barely hear them.”

Before long, the owls will head back to their native habitat, Rauch said. But in the meantime, Almond and her coworkers at the USDA are enjoying the rare appearance of the birds.

“Not many people in their lifetime will ever see one at all and here we are so blessed to have one right outside our office,” she said. 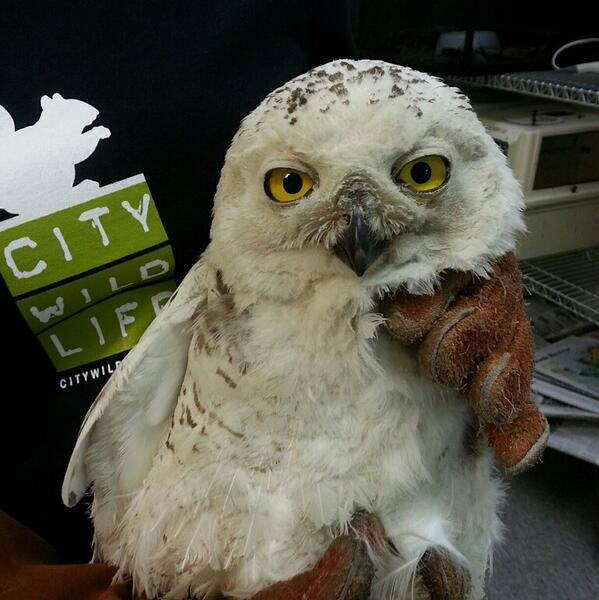