WASHINGTON — A philanthropist who grew up in a working-class family in Baltimore is being honored for helping to preserve treasures of American history while also offering support to the arts, education, research and development.

The Lyndon B. Johnson Foundation awarded its most prestigious prize, the LBJ Liberty & Justice for All Award, to David M. Rubenstein at the National Archives Museum on Wednesday.

“He is just a truly remarkable man,” Larry Temple, chairman of the LBJ Foundation, told WTOP. “The coining of the phrase ‘patriotic philanthropy’ just fits him like a glove.”

Rubenstein’s donations are many and varied. They helped build the Giant Panda Habitat at National Zoo and are helping with the Kennedy Center’s expansion project. They helped preserve everything from the Washington Monument to the Lincoln Memorial and include donations of rare copies of historical documents such as the Magna Carta. 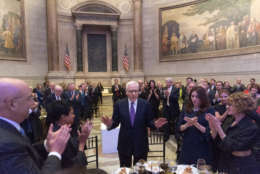 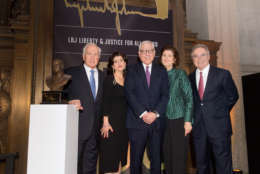 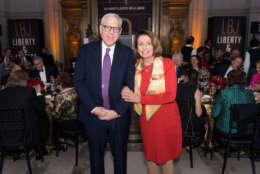 “And I know, without reservation, how proud my father would be that you are the recipient of this award, because you are indeed the embodiment of what the great American dream is all about,” Luci Baines Johnson told Rubenstein at the ceremony.

Rubenstein attended college and law school with the help of scholarships, and went on to co-found The Carlyle Group of D.C., one of the largest private equity firms in the world.