The zoo announced Monday that their 9-week-old male Sumatran tiger cub left from BWI-Marshall International Airport on the way to the San Diego Zoo Safari Park. He’ll live with another tiger cub who has been with the San Diego zoo for a couple of weeks.
Listen now to WTOP News WTOP.com | Alexa | Google Home | WTOP App | 103.5 FM

WASHINGTON — One of the Smithsonian National Zoo’s youngest residents has been sent to California. 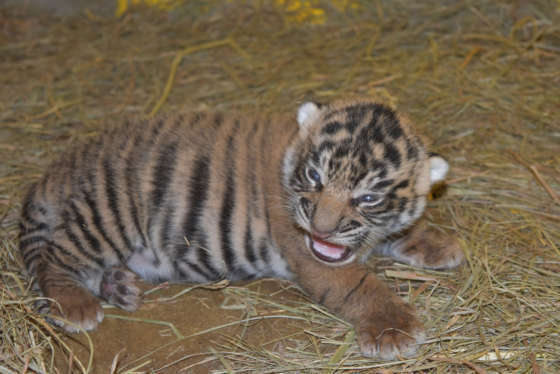 The birth of the tiger cub

Photos and a story on the birth of the Sumatran tiger cub in July at the National Zoo.

The zoo announced Monday that their 9-week-old male Sumatran tiger cub left from BWI-Marshall International Airport on the way to the San Diego Zoo Safari Park. He’ll live with another tiger cub who has been with the San Diego zoo for a couple of weeks.

The National Zoo cub was born July 11, and at age 19 days his mother, Damai, stopped showing maternal behaviors toward him, becoming aggressive when he tried to nurse, the zoo said in a statement. Things got better for a while after the zoo began feeding him a formula composed of various replacements for tiger milk, but she became aggressive toward him again in the last few weeks.

The cub is in good health, the zoo said, but shipping him off was tough.

“My team has mixed emotions right now,” said Craig Saffoe, curator of the zoo’s Great Cats team. “As his caretakers, we’ve done everything in our power to help him survive, thrive and socialize with his mother so that he can grow up to be a ‘healthy’ tiger. Now that Damai is no longer displaying the maternal behaviors we once saw, our best option is to pair him with the cub at San Diego Zoo.”

There’s a bright side — the cub will be living with another cub, which the zoo in San Diego got Aug. 23 after the U.S. Customs and Border Protection officers found him in a vehicle entering the U.S. from Mexico.

“Having another tiger that is about his age to interact with will be tremendously beneficial to the both of them,” Saffoe said in the statement. “They’ll be able to play, wrestle and learn how to be tigers together, which is instrumental to his long-term social development.”

But look at that face …