The heavy rain that's expected will likely bring a disgusting side effect — sewage flowing into the Potomac and Anacostia rivers. But new tunnels are being built to alleviate that.
Listen now to WTOP News WTOP.com | Alexa | Google Home | WTOP App | 103.5 FM

WASHINGTON — The heavy rain that’s expected will likely bring a disgusting side effect — sewage flowing into the Potomac and Anacostia rivers.

But during next year’s summer storms, D.C. should be seeing the effects of its long-term project to reduce the amount of raw sewage in local rivers.

Built before 1900, D.C.’s combined sewer overflow system carries both sewage and stormwater in a single pipe.

During dry conditions, the sewage diverts to the Blue Plains Wastewater Treatment Plant.

However, during heavy rain, the overwhelmed pipes can’t carry all of the sewery water to Blue Plains, and a substantial amount flows out of pipes into the Anacostia and Potomac rivers.

New tunnels systems are being built that allow sewage to travel directly to Blue Plains.

In January, DC Water’s Clean Rivers Project completed a tunnel that runs from the RFK Stadium area to Poplar Point, in the 2300 block of South Capitol Street Southeast.

The new tunnel connects with an already-completed four-mile tunnel to Blue Plains.

By March 2018, sewage that currently flows from 15 overflow pipes into the Anacostia will be diverted into smaller tunnels, and travel through the new system.

Before 2025, another tunnel is expected to be completed to deal with combined sewer overflow into the Potomac River. 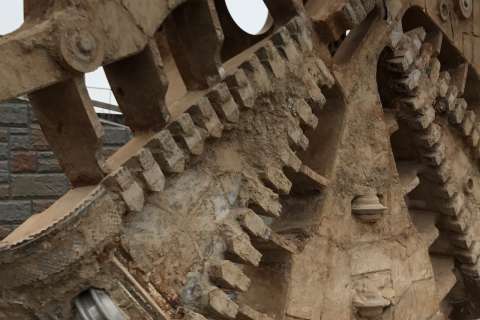