Investigators look into cause of fatal DC apt. fire

Federal agents from the Bureau of Alcohol Tobacco, Firearms and Explosives joined DC Fire investigators looking for the origin and the cause of the weekend apartment building fire that killed a man and injured 11 people, including five firefighters.
Listen now to WTOP News WTOP.com | Alexa | Google Home | WTOP App | 103.5 FM
(1/2)

WASHINGTON — Federal agents from the Bureau of Alcohol Tobacco, Firearms and Explosives joined D.C. Fire and EMS investigators looking for the origin and the cause of the weekend apartment building fire that killed a man and injured 11 people, including five firefighters.

More than 200 people have been displaced from the four-story building in the 1300 block of Peabody Street NW, which is several blocks from the intersection of Georgia and Missouri avenues.

A D.C. Fire and EMS official said the investigation will take some time, but a preliminary finding into the fire’s cause could be made public Tuesday.

While the person who died in the fire has not yet been identified, D.C. Fire and EMS spokesman Doug Buchanan said over the weekend that he believed the victim was a 37-year-old man.

Dean said investigators think the fire originated where the man was found. 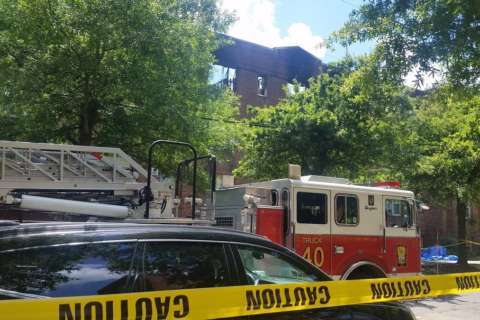